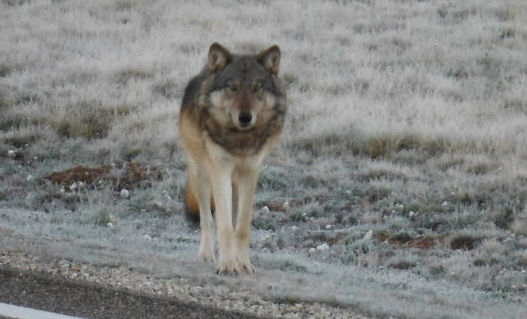 The lone wolf seen roaming around the Grand Canyon’s North Rim in November 2014 has been confirmed dead….

The match was confirmed after extensive DNA analysis by the University of Idaho, according to a U.S. Fish and Wildlife Service news release. DNA samples taken from the wolf killed in Utah were compared with samples taken from a wolf seen near the Grand Canyon during the fall. The samples confirmed it was the same wolf, and that it had traveled through Arizona and Utah into Wyoming where it was collared Jan. 8, 2014.

The northern gray wolf was around 3 years old when it was shot and killed Dec. 28, 2014, by hunters in Beaver County, state wildlife officials said. The hunters had mistaken the wolf for a coyote and shot it near the south end of the Tushar Mountains.

The men found a collar, which had been attached to the animal for identification and tracking purposes. It was the first documented killing of a wolf in Utah in several years, officials said.

The Utah Division of Wildlife Resources said reports of wolf sightings are on the rise in Utah, but biologists have so far been unable to confirm if there are any breeding pairs or an actual pack. Officials said the first modern wolf confirmed in Utah after the species was exterminated from the state was captured Nov. 30, 2002. It was a collared animal from Yellowstone National Park, and it was returned to the park.

In Utah, ranchers may shoot wolves, but only in an area north of I-80 and east of I-84 to the Wyoming and Idaho lines. The gray wolf in Southern Utah is endangered and protected under the Endangered Species Act, the news release said.

The investigation into the killing of the wolf is still ongoing.

Web articles – via partners/network co-ordinators. This website and its contents are the exclusive property of ANGA Media Corporation . We appreciate your feedback and respond to every request. Please fill in the form or send us email to: [email protected]
Previous: Rosamund Pike Got Naked, Pumped Breastmilk at the BAFTAs (Video)
Next: Helena Bonham Carter gets naked to help save the fish (Photo)