Home » Science » How Canada faked its place in space (Photo) 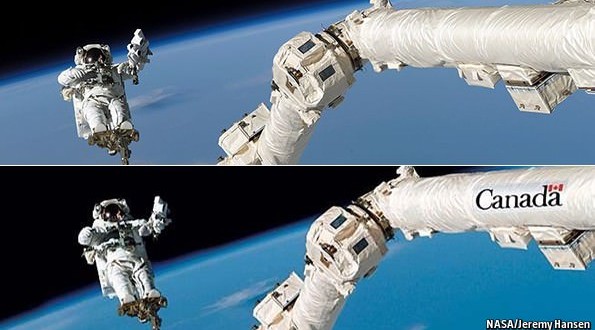 How Canada faked its place in space (Photo)

How Canada faked its place in space (Photo)

Canada blatantly Photoshopped U.S. photos in order to slap a non-existent Canadian logo on the International Space Station, a blog post by the Economist revealed Friday.

The photo in question depicts U.S. astronaut Stephen K. Robinson perched on the end of the Canadarm2 during a 2005 spacewalk on the International Space Station.

NASA archives still have an original, unaltered photo. The two are slightly different, apart from the doctored Canada logo, and it appears that the camera captured at least two frames of the 2005 spacewalk by U.S. astronaut Steve Robinson, so that his hands and the clouds below have shifted slightly from one to the other.

The Canadian Space Agency said Friday afternoon it had just heard of the photo issue and was looking into it.

In fact, the Canada logo was in the original photo. But it’s hard to see: it shows upside-down and at the far end of the arm from the camera’s perspective.

The altered version puts it right-side up and closer to the camera.

The economic plan website isn’t the only place it appeared. It also showed up in a“Discover Canada” website, and even on the Space Agency’s Tumblr website.

NASA has the original photo.

One astronomer was scathing.

“We get enough grand press from the Canadarm as it is. You don’t need to embellish,” said Paul Delaney of York University.

“Everybody knows that the thing sticking out of the Space Station and the shuttles is Canadarm, (version) one or two.

“Almost every time there’s an image taken … it has Canada clearly labelled on this. So if you’ve managed to snag a photograph that doesn’t have it clearly on there, go back into the archives and find one that you like!

“You don’t have to go and doctor it. That just to me is cheap and cheesy,” he said.

“We’re trying to wave a flag that is already waving hard. What are you trying to do, blow it into a gale or something?”

Web articles – via partners/network co-ordinators. This website and its contents are the exclusive property of ANGA Media Corporation . We appreciate your feedback and respond to every request. Please fill in the form or send us email to: [email protected]
Previous: Justin Bourque Mountie killer gets 75 years without parole
Next: Tom Cruise, Lindsay Lohan ‘not’ dating : Report