Home » Science » About Martha, the last of the passenger pigeons, Report 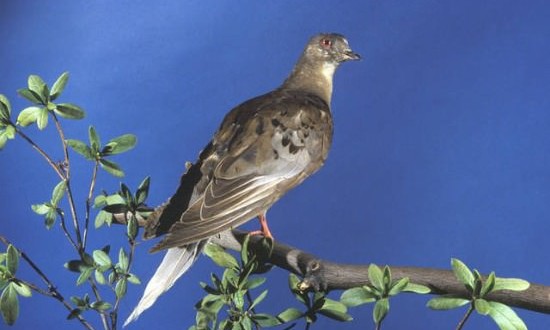 About Martha, the last of the passenger pigeons, Report

About Martha, the last of the passenger pigeons, Report

When “Martha,” the world’s last remaining passenger pigeon at the Cincinnati Zoo died on Sept. 1, 1914, it was the last breath of air ever taken by a species once numbering in the billions.

It was the first big wakeup call about society’s potential to destroy the environment. Extinction was no longer just about dodo birds or other rare species; it could happen to a creature once so plentiful that it was both a major food source and a pest of biblical proportions.

The passenger pigeon will be the focus of one of the activities at the Anniston Museum of Natural History on Saturday for Museum Day, which features free admission.

Unlike today’s rock pigeon, which was brought over from Europe, passenger pigeons were native to North America. They ranged from Canada to Mexico, and the immensity of flocks is hard to imagine. In 1805, Alexander Wilson, America’s first ornithologist, wrote of a nesting area that covered almost every tree for 40 square miles.

John James Audubon, the famous naturalist and bird painter, wrote about flocks he observed in 1813 while traveling in Kentucky. During his journey’s last 55 miles, “The air was literally filled with pigeons; the light of noonday was obscured as by an eclipse; the dung fell in spots, not unlike melting flakes of snow. The pigeons were still passing in undiminished numbers and continued to do so for three days in succession.”

Throughout the 19th century, many people reported similar events, including flocks in the billions that darkened the sky. When passenger pigeons chose to land, they could strip a field of crops or a grove of nut-bearing trees in no time.

But the docile birds had two great qualities — they were delicious and easy to kill. Long an important food source for Native Americans, a flock is said to have saved most of New Hampshire from starvation after a crop failure in 1781.

“The banks of the Ohio were crowded with men and boys incessantly shooting at the pilgrims, which flew lower as they passed the river,” Audubon wrote of his 1813 sighting in Louisville. “For a week or more, the population fed on no other flesh than that of pigeons and talked of nothing but pigeons.”

So how did the pigeon population go from billions to zero in less than 50 years? Many questions remain, but scientists think one factor was widespread logging that destroyed forest habitat the huge flocks needed to reproduce.

But the biggest factor was excessive hunting. Once railroads and telegraph lines spread across the country, flocks could easily be tracked by commercial hunting crews and decimated.
About this time, sportsmen hunters began adopting the conservation ethic that has made huge contributions to wildlife and habitat preservation. But it came too late for the passenger pigeon. After the 1870s, populations plummeted.

The last captive passenger pigeons were at the Cincinnati Zoo. By 1910, only Martha remained. Upon her death, she was frozen in a 300-pound block of ice and shipped to the Smithsonian Institution, where she was stuffed and put on display.

Web articles – via partners/network co-ordinators. This website and its contents are the exclusive property of ANGA Media Corporation . We appreciate your feedback and respond to every request. Please fill in the form or send us email to: [email protected]
Previous: New Novartis drug may upend heart failure treatment, Study
Next: Lynden Dorval : teacher fired for giving zeroes wins appeal