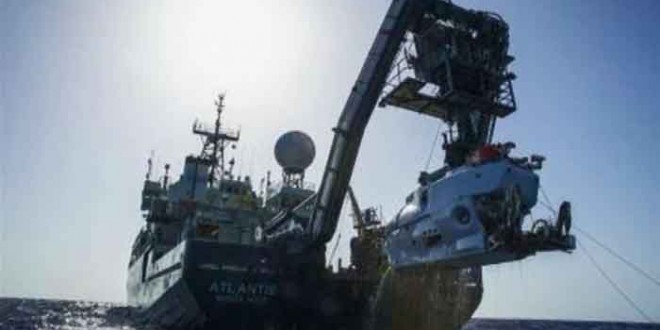 Mystery Shipwreck found off N.C. coast may date back to American Revolution.

In deep waters, a hundred miles off the coast of North Carolina coast, scientists have discovered debris from an unknown shipwreck that could have sunk around the time of the American Revolution.

The researchers discovered the wreck on July 12 while aboard the Woods Hole Oceanographic Institution research ship Atlantis. Artifacts at the site indicate the ship could date back to the American Revolution.

“This is an exciting find, and a vivid reminder that even with major advances in our ability to access and explore the ocean, the deep sea holds its secrets close,” expedition leader Cindy Van Dover, director of the Duke University Marine Laboratory, said in a statement.

The wreck appears to date back to the late 18th or early 19th century. Researchers spotted it with the help of a robotic underwater vehicle named Sentry and a manned submersible named Alvin.

“I have led four previous expeditions to this site, each aided by submersible research technology to explore the sea floor — including a 2012 expedition where we used Sentry to saturate adjacent areas with sonar and photo images,” Van Dover said. “It’s ironic to think we were exploring within 100 meters of the wreck site without an inkling it was there.”

After discovering the shipwreck, the crew alerted NOAA’s Marine Heritage Program, which will try to date and identify the ship.

James Delgado, director of the Marine Heritage Program, said the wreck rests along the path of the Gulf Stream, which mariners have used for centuries as a maritime highway to North American ports, the Caribbean, the Gulf of Mexico and South America.

“The find is exciting, but not unexpected,” he said in a statement. “Violent storms sent down large numbers of vessels off the Carolina coasts, but few have been located because of the difficulties of depth and working in an offshore environment.”

Web articles – via partners/network co-ordinators. This website and its contents are the exclusive property of ANGA Media Corporation . We appreciate your feedback and respond to every request. Please fill in the form or send us email to: [email protected]
Previous: Wayne Carson : ‘Always on My Mind’ writer dies at 72
Next: Woman dies in police custody at Maskwacis, watchdog investigating