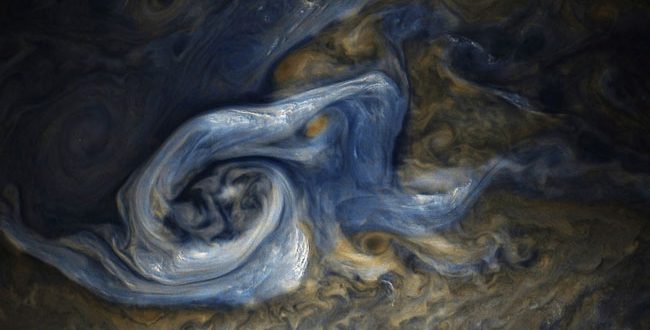 This color-enhanced image of a massive, raging storm in Jupiter’s northern hemisphere was captured by NASA’s Juno spacecraft during its ninth close flyby of the gas giant planet.

According to NASA, the swirling storm is rotating counter-clockwise over Jupiter’s northern hemisphere.

It was captured on October 24, and reveals massive bright clouds and their shadows, stretching roughly 4 to 8 miles across (7 to 12 kilometers).

‘These appear similar to the small clouds in other bright regions Juno has detected and are expected to be updrafts of ammonia ice crystals possibly mixed with water ice,’ NASA notes.

The stunning image was processed by citizen scientists Gerald Eichstädt and Seán Doran using data from the JunoCam imager.

The space agency recently released several images from Jupiter’s ninth flyby, including a look at the planet’s ‘string of pearls.’

This phenomenon is a series of eight massive rotating storms on Jupiter.

The image was taken by Juno on October 24, and was processed and colour enhanced by citizen scientists Gerald Eichstadt and Sean Doran.

A ‘string of pearls’ was pictured in the image at 40 degrees south latitude on the gas giant planet.

Nasa describes them as ‘massive counterclockwise rotating storms that appear as white ovals in the gas giant’s southern hemisphere.’

Since they were first spotted in 1986, these white ovals have varied in number from six to nine, with eight currently visible.

Web articles – via partners/network co-ordinators. This website and its contents are the exclusive property of ANGA Media Corporation . We appreciate your feedback and respond to every request. Please fill in the form or send us email to: [email protected]
Previous: Murderous cult leader Charles Manson dies aged 83
Next: Former NASA Employee Spills Secret about UFO and Alien Conspiracy