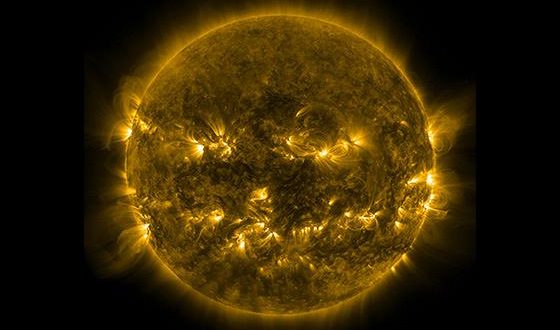 NASA has released a chilling compilation of the ‘sounds’ of space, bringing to life the radio emissions captured by its spacecraft as they journey across the solar system.

The collection, shared in a new playlist on Soundcloud, includes everything from the roaring warble of lightning on Jupiter to the eerie boom of starlight.

Read more about some of the sounds featured here:

Juno Captures the ‘Roar’ of Jupiter: NASA’s Juno spacecraft has crossed the boundary of Jupiter’s immense magnetic field. Juno’s Waves instrument recorded the encounter with the bow shock over the course of about two hours on June 24, 2016.

Plasma Waves: Plasma waves, like the roaring ocean surf, create a rhythmic cacophony that — with the EMFISIS instrument aboard NASA’s Van Allen Probes — we can hear across space.

Saturn’s Radio Emissions: Saturn is a source of intense radio emissions, which were monitored by the Cassini spacecraft. The radio waves are closely related to the auroras near the poles of the planet. These auroras are similar to Earth’s northern and southern lights. More of Saturn’s eerie-sounding radio emissions.

Sounds of a Comet Encounter: During its Feb. 14, 2011, flyby of comet Tempel 1, an instrument on the protective shield on NASA’s Stardust spacecraft was pelted by dust particles and small rocks, as can be heard in this audio track.

Web articles – via partners/network co-ordinators. This website and its contents are the exclusive property of ANGA Media Corporation . We appreciate your feedback and respond to every request. Please fill in the form or send us email to: [email protected]
Previous: Researchers discover how Mars’ landscape is formed
Next: Shock claim: Nibiru to bring apocalyptic earthquakes on Nov 19