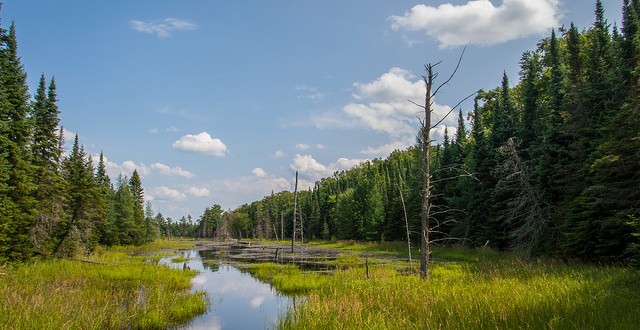 If you brushed your teeth this morning, chances are you used water to rinse. You may have also cooked a meal or quenched your thirst with water. World Wetlands Day helps us recognize and more fully understand that wetlands are making our lives better by working for us throughout the seasons.

By recognizing World Wetlands Day we can learn more about wetlands, the great work they do for our environment and for us, and why we should care and conserve them.

Wetlands are called many things…sloughs, potholes, bogs or fens, marshes, swamps or lowlands that can only sometimes hold water.

No matter the name, wetlands are a substantial part of our lives and deserve our care, and our respect.

Wetlands help mitigate the extremes of flooding or drought, and they store carbon by helping remove sediments, impurities, excess nutrients and bacteria, cleansing waters used for cooking, bathing and quenching thirst. Over two-thirds of Canadians get their drinking water from lakes, rivers and reservoirs, and the quality of that water depends on watershed health and functioning wetlands. Like giant sponges, wetlands absorb, filter and replenish water as well as buffer our communities from climatic extremes.

Wetlands are also key nesting and feeding grounds for many migratory bird species including waterfowl and shorebirds, and they are nursery habitat for amphibians and fish, as well. At least one-half of our wildlife species rely on wetlands for part of their lifecycle.

25% of the world’s wetlands are on Canadian soil…more than in any other country…but they’re disappearing readily, drained to construct roads and cities, and for industry and agricultural production. Wetland loss is most prevalent across southern Canada.

In Saskatchewan, the Nature Conservancy of Canada has conserved 1,544 acres (625 hectares) around Reed Lake in southwestern Saskatchewan, in an area known as the Chaplin, Old Wives, Reed Lake area that is world-renowned for its numbers and diversity of shorebird species.

This area was designated an area of hemispheric shorebird significance through the Western Hemisphere Shorebird Reserve Network. From American avocets to sanderlings and sandpipers and the endangered piping plover, many birds can be easily viewed at this vital nesting and stopover haven.

NCC’s Big Quill Lake South, 460 acres (186 hectares) of shallow saline wetland with mixed grasslands, is part of Saskatchewan’s Quill Lakes in south-central Saskatchewan. This world-class birding habitat is also designated through the Western Hemisphere Shorebird Reserve Network with international significance for shorebirds. In addition, the site is also an Important Bird Area and a Saskatchewan Heritage Marsh where visitors can view many species of waterfowl and shorebirds.

Web articles – via partners/network co-ordinators. This website and its contents are the exclusive property of ANGA Media Corporation . We appreciate your feedback and respond to every request. Please fill in the form or send us email to: [email protected]
Previous: Miley Cyrus, Liam Hemsworth Wedding Coming Soon? source says
Next: Rob kardashian Beard: Paparazzi Catches Reality Star Rob And Blac Chyna As They Make First Public Apeparance “Photo”