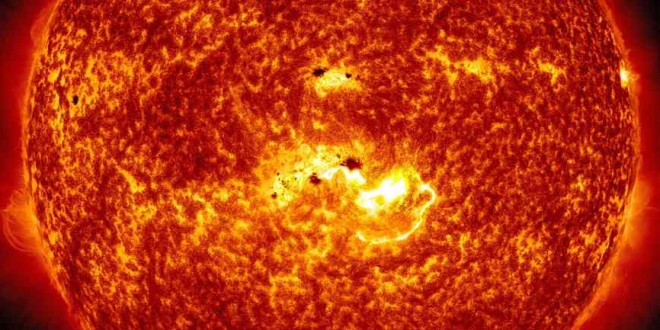 NASA is reporting that a massive solar flare erupted from the Sun Tuesday, January 7. The solar flare is associate with one of the largest sunspot groups seen on the Sun’s surface in a decade! The sunspot is currently in the middle of the Sun as seen from earth. NASA officials say it is as wide as seven Earths!

An unmanned resupply cargo rocket that was to have been launched to the International Space Station on Wednesday was postponed until at least Thursday because of the potential radiation danger.

The sun is at the peak of a weak 11-year storm cycle.

Some passenger jets were being diverted from the poles to avoid potential communication and health issues as the intensity of the solar storm was increased from “moderate” to “strong.” GPS devices also were at risk.

But the six men aboard the space station were safe from the solar fallout, NASA said, and satellites also faced no threat. The Cygnus cargo ship aboard the rocket, for example, is built to withstand radiation from solar flare-ups.

Web articles – via partners/network co-ordinators. This website and its contents are the exclusive property of ANGA Media Corporation . We appreciate your feedback and respond to every request. Please fill in the form or send us email to: [email protected]
Previous: Freddie Mac : Mortgage survey rates edge up to start 2014
Next: Pyongyang : Smith says North Korea game dwarfed by politics