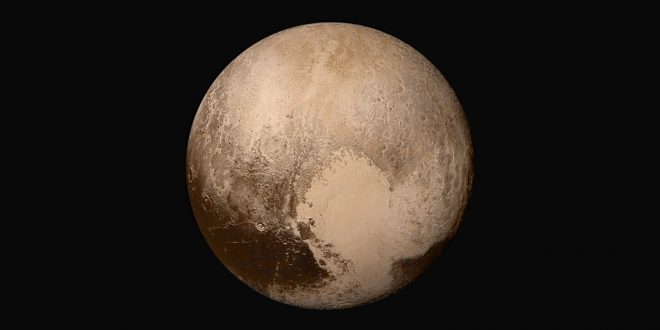 There happens to be the possible existence of a hidden salty ocean beneath the planet Pluto’s heart.

A new study published in Geophysical Research Letters has used computer modeling to show there is a liquid ocean on Pluto more than 62 miles deep with salinity similar to the Dead Sea right here on Earth.

The study team was focused on Sputnik Planum, a basin nearly 560 miles across that comprises the western half the Pluto’s now-famous heart-shaped feature. The basin seems to have been produced by an impact, probably by an object 120 miles across or bigger.

Sputnik Planum drew researchers’ attention because of its position. Pluto and its moon Charon are tidally locked with each other, which means they always show the same face to each other as they rotate. Sputnik Planum sits on this tidal axis and this indicates the basin has greater mass than the rest of Pluto’s icy crust, a phenomenon known as a positive mass anomaly. As Charon’s gravity affects Pluto, it yanks proportionally more on parts of greater mass, tilting the planet until Sputnik Planum became lined up with the tidal axis.

An asteroid or meteor impact crater typically has a negative mass anomaly, and the fact that Sputnik Planum is positive immediately drew investigators attention. The study team said the high amount of mass in Sputnik Planum may be due to liquid hanging out beneath the icy surface.

A large impact first digs out a planet’s exterior, and then a bounce back draws material up from deep within the planet. If that rising material is denser than what was there originally, the crater ultimately ends up having the same mass as it had before the impact. This is a situation geologists call “isostatic compensation”.

Because water is denser than ice, liquid water rising up from beneath Pluto’s icy surface would even out the mass of the Sputnik Planum crater, the study team said. Therefore, if the basin began with neutral mass, then nitrogen ice deposited later to form an icy crust would produce a positive mass anomaly.

“We wanted to run computer models of the impact to see if this is something that would actually happen,” study Brandon Johnson, a Brown University geologist, said in a news release. What we found is that the production of a positive mass anomaly is actually quite sensitive to how thick the ocean layer is. It’s also sensitive to how salty the ocean is, because the salt content affects the density of the water.”

The simulation that best modeled Sputnik Planum’s depth, while also generating a crater with compensated mass, was one involving Pluto having an ocean layer greater than 62 miles thick, with a salinity of around 30 percent.

“What this tells us is that if Sputnik Planum is indeed a positive mass anomaly — and it appears as though it is — this ocean layer of at least 100 kilometers has to be there,” Johnson said. “It’s pretty amazing to me that you have this body so far out in the solar system that still may have liquid water.”

Web articles – via partners/network co-ordinators. This website and its contents are the exclusive property of ANGA Media Corporation . We appreciate your feedback and respond to every request. Please fill in the form or send us email to: [email protected]
Previous: Northern Lights trump street lights in Iceland (Watch the lights live wherever you are)
Next: Construction begins on Quebec’s fourth and latest ‘Porsche Centre’