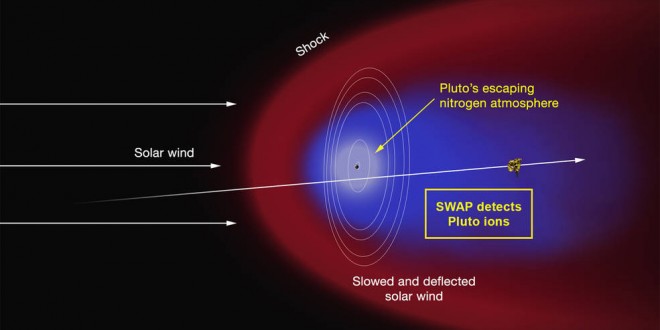 Pluto just can’t stop blowing our minds. Not only is it a geologically active world with ice mountains the size of the Rockies and frozen plains of methane and nitrogen, we’ve just learned that Pluto’s atmosphere is pouring away into space. It’s leaving a massive tail of charged plasma in its wake.

New Horizons has discovered a region of cold, dense ionized gas tens of thousands of miles beyond Pluto — the planet’s atmosphere being stripped away by the solar wind and lost to space. Beginning an hour and half after closest approach, the Solar Wind Around Pluto (SWAP) instrument observed a cavity in the solar wind — the outflow of electrically charged particles from the Sun — between 48,000 miles (77,000 km) and 68,000 miles (109,000 km) downstream of Pluto. SWAP data revealed this cavity to be populated with nitrogen ions forming a “plasma tail” of undetermined structure and length extending behind the planet.

Similar plasma tails are observed at planets like Venus and Mars. In the case of Pluto’s predominantly nitrogen atmosphere, escaping molecules are ionized by solar ultraviolet light, “picked up” by the solar wind, and carried past Pluto to form the plasma tail discovered by New Horizons. Prior to closest approach, nitrogen ions were detected far upstream of Pluto by the Pluto Energetic Particle Spectrometer Science Investigation (PEPSSI) instrument, providing a foretaste of Pluto’s escaping atmosphere.

Plasma tail formation is but one fundamental aspect of Pluto’s solar wind interaction, the nature of which is determined by several yet poorly constrained factors. Of these, perhaps the most important is the atmospheric loss rate. “This is just a first tantalizing look at Pluto’s plasma environment,” says co-investigator Fran Bagenal, University of Colorado, Boulder, who leads the New Horizons Particles and Plasma team. “We’ll be getting more data in August, which we can combine with the Alice and Rex atmospheric measurements to pin down the rate at which Pluto is losing its atmosphere. Once we know that, we’ll be able to answer outstanding questions about the evolution of Pluto’s atmosphere and surface and determine to what extent Pluto’s solar wind interaction is like that of Mars.”

Web articles – via partners/network co-ordinators. This website and its contents are the exclusive property of ANGA Media Corporation . We appreciate your feedback and respond to every request. Please fill in the form or send us email to: [email protected]
Previous: Brad Arnold Kicks Out Fan: 3 Doors Down singer throws out concertgoer for pushing woman “Video”
Next: Godfather Actor Dies : ‘Alex Rocco’ Has Passed Away & The Late Star Was One Of The Best Character Actors In Hollywood