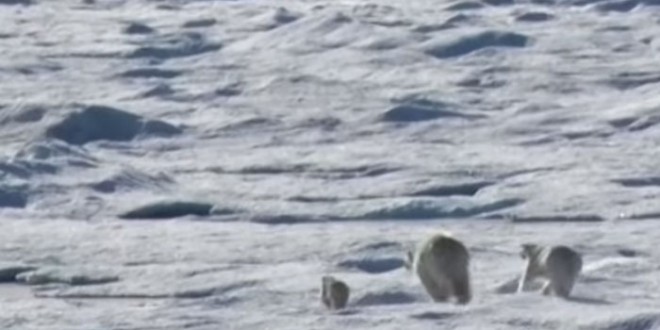 GRAPHIC WARNING: Rare video footage has emerged showing an adult polar bear killing and eating a young cub, and it’s been suggested that climate change could be to blame.

The National Geographic video shows the adult male overtaking its victim – before eating it in front of its mother.

Scientists have recently observed that the cannibalism is on the increase among the animals – possibly due to global warming.

Whenever ice disappears, seals become harder to hunt – and polar bears turn to other sources of food.

A report in the journal Arctic in 2011 by Jenny Ross described how the behaviour was becoming more widespread.

Ross wrote, ‘’Predating another bear is a way to get food; it’s probably a relatively easy way for a big adult male.

‘As the area of sea ice that polar bears can use for hunting declines, progressively fewer seals are accessible to the bears, and therefore the bears’ hunting success likely declines as well.’

‘Thus, at this time of year, young polar bears may represent a possible food source for adult males.

‘As the climate continues to warm in the Arctic and the sea ice melts earlier in the summer, the frequency of such intraspecific predation may increase.’

Web articles – via partners/network co-ordinators. This website and its contents are the exclusive property of ANGA Media Corporation . We appreciate your feedback and respond to every request. Please fill in the form or send us email to: [email protected]
Previous: Eating almonds daily may boost health; says new Research
Next: Warner Bros. buys Korean drama ‘DramaFever’ SVOD service