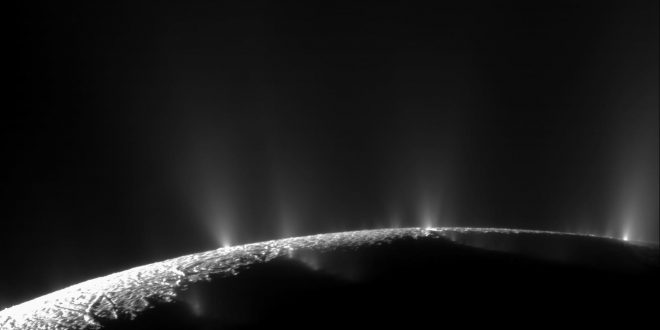 Heat from friction could power hydrothermal activity on Saturn’s moon Enceladus for billions of years if the moon has a highly porous core, according to a new modeling study by European and U.S. researchers working on NASA’s Cassini mission.

A paper published in Nature Astronomy today presents the first concept that explains the key characteristics of 500 km-diameter Enceladus as observed by the international Cassini spacecraft over the course of its mission, which concluded in September.

This includes a global salty ocean below an ice shell with an average thickness of 20–25 km, thinning to just 1–5 km over the south polar region. There, jets of water vapour and icy grains are launched through fissures in the ice. The composition of the ejected material measured by Cassini included salts and silica dust, suggesting they form through hot water – at least 90ºC – interacting with rock in the porous core.

These observations require a huge source of heat, about 100 times more than is expected to be generated by the natural decay of radioactive elements in rocks in its core, as well as a means of focusing activity at the south pole.

The tidal effect from Saturn is thought to be at the origin of the eruptions deforming the icy shell by push-pull motions as the moon follows an elliptical path around the giant planet. But the energy produced by tidal friction in the ice, by itself, would be too weak to counterbalance the heat loss seen from the ocean – the globe would freeze within 30 million years.

As Cassini has shown, the moon is clearly still extremely active, suggesting something else is happening.

“Where Enceladus gets the sustained power to remain active has always been a bit of mystery, but we’ve now considered in greater detail how the structure and composition of the moon’s rocky core could play a key role in generating the necessary energy,” says lead author Gaël Choblet from the University of Nantes in France.

In the new simulations the core is made of unconsolidated, easily deformable, porous rock that water can easily permeate. As such, cool liquid water from the ocean can seep into the core and gradually heat up through tidal friction between sliding rock fragments, as it gets deeper.

Water circulates in the core and then rises because it is hotter than the surroundings. This process ultimately transfers heat to the base of the ocean in narrow plumes where it interacts strongly with the rocks. At the seafloor, these plumes vent into the cooler ocean.

Web articles – via partners/network co-ordinators. This website and its contents are the exclusive property of ANGA Media Corporation . We appreciate your feedback and respond to every request. Please fill in the form or send us email to: [email protected]
Previous: New Research: How the dinosaur-killing asteroid affected mammals
Next: Mars city living: Your bedroom will look a lot different