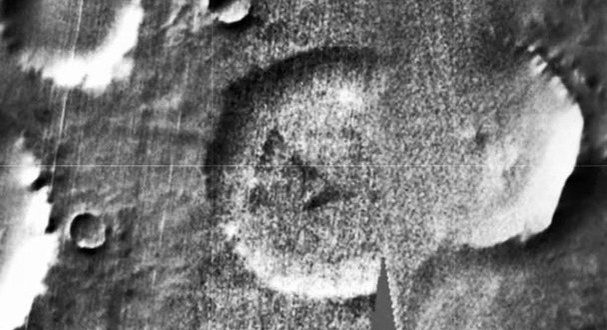 Conspiracy theorists believe they have found what we’ve all been looking for – proof of life on Mars.

A triangular-shaped object has been found on the surface of Mars near a dome structure.

And truth-seekers believe this is a crashed UFO near an alien base on the Red Planet.

The “discoveries” have been revealed in a video on YouTube by conspiracy theorist channel SecureTeam10.

The narrator claims that as isolated discoveries they are not much, but when they are in such close proximity, he deems it as too much of a coincidence.

He says: “When you find another object in the same general area that again looks out of place.

“We have found these domes on multiple planets and moons.

“It is said that these domes are actually providing cover for existing bases so there is a breathable atmosphere.

“Even Nasa and our own space agencies have talked about getting us to the moon and establishing bases have drawn up their plans using the exact same thing – domes.

“Could that be what we’re seeing here? A camouflage among this crater field. Or is this some sort of ancient relic?”

However, commenters on the video were not so convinced.

One user called Angrydog Productions wrote: “Hmm sun comes from the front… shadow is directly under the UFO… doesn’t match up.”

Another, P.Gallo AllAmericanAngel, added: “Some of the lighting and shadows don’t seem to look quite right.”

Web articles – via partners/network co-ordinators. This website and its contents are the exclusive property of ANGA Media Corporation . We appreciate your feedback and respond to every request. Please fill in the form or send us email to: [email protected]
Previous: Breastfeeding cuts risk of eczema by 54 percent, says new study
Next: What Is This Martian Lake Doing In Canada?! (Video)