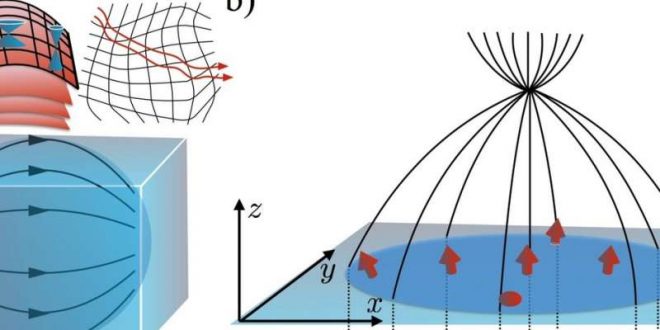 Scientists have shown how the principles of general relativity open the door to novel electronic applications such as a three-dimensional electron lens and electronic invisibility devices.

The scientists propose Weyl metamaterials, a generalisation of Weyl semimetals, that enable new types of electronic devices through geometry engineering.

“The systems we introduced offer a route to make the charge carriers move as if they were living in a curved geometry, providing a tabletop laboratory for simulating curved-space quantum physics and certain cosmological phenomena,” Alex Westström explains.

Weyl semimetals are an example of recently discovered quantum materials that have received a lot of attention. Charge carriers in these materials behave as if they were massless particles moving at the speed of light.

“We discovered that Weyl metamaterials may serve as a platform for exotic electronic devices such as the 3D electron lens, where the trajectories of charge carriers are focused much like beams of light in an optical lens,” Teemu Ojanen says.

The electric conduction in Weyl semimetals reflects the physics of Einstein’s special theory of relativity. Nevertheless, special relativity also assumes an absence of gravity, which Einstein formulated as a geometry of space-time.

The theory of Weyl metamaterials also paves the way for fundamentally new electronics applications, for instance, the development of electronic invisibility devices. The key idea behind the potential applications is an artificially created curved geometry, which bends the motion of charge carriers in a controlled way.

“In optics, it’s been known for centuries that light always chooses the quickest trajectory. In curved geometry, the quickest path doesn’t look like a straight line for those watching from outside. The functionality of optical invisibility devices, where the beams of light bypass a hidden object, is in fact based on the application of curved-space geometry. It would be a breakthrough in fundamental research to achieve a similar functionality in electronic systems,” Ojanen adds.

Web articles – via partners/network co-ordinators. This website and its contents are the exclusive property of ANGA Media Corporation . We appreciate your feedback and respond to every request. Please fill in the form or send us email to: [email protected]
Previous: Sleep deprivation like alcohol, says new study
Next: Juli Briskman: Cyclist who flipped off Trump claims she was fired from job