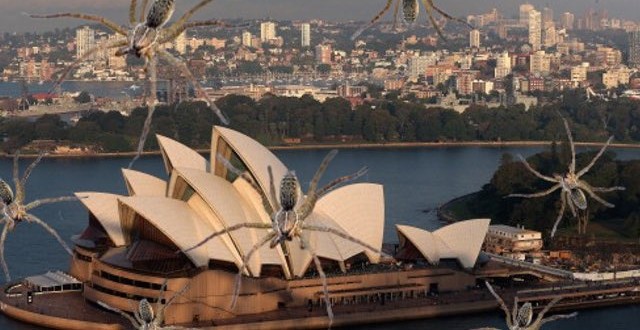 Researchers are offering up explanations after millions of baby spiders appeared to rain down on Goulburn, Australia, in early May, the Sydney Morning Herald reports.

This month’s eight-legged downpour in the country’s Southern Tablelands region is just the most recent example of an event commonly known as ‘spider rain’.

The phenomenon, dubbed ‘angel hair’ by some, sees spiders climb to the top of plants and trees and leap off, using a streamer of silk to catch the breeze and carry themselves into the air.

The event can sometimes lead to entire fields and towns covered in a thin blanket of the silk.

Scientists believe the technique – known as ballooning – is what has allowed arachnids to colonise virtually every continent on Earth.

The explain though is likely cold comfort for the residents of Goulburn in New South Wales who awoke to the sun being almost blotted out when thousands of baby spiders rained down from the sky.

Resident Ian Watson told the Sydney Morning Herald that his house had been “abandoned and taken over by spiders”.

“The whole place was covered in these little black spiderlings and when I looked up at the sun it was like this tunnel of webs going up for a couple of hundred metres into the sky.”

“It was beautiful. But at the same time I was annoyed because … you couldn’t go out without getting spider webs on you. And I’ve got a beard as well, so they kept getting in my beard.”

Web articles – via partners/network co-ordinators. This website and its contents are the exclusive property of ANGA Media Corporation . We appreciate your feedback and respond to every request. Please fill in the form or send us email to: [email protected]
Previous: Royal Wedding : Swedish Prince Carl Phillip and Sofia Hellqvist marrying in June
Next: Giant conger eel landed by Plymouth fisherman