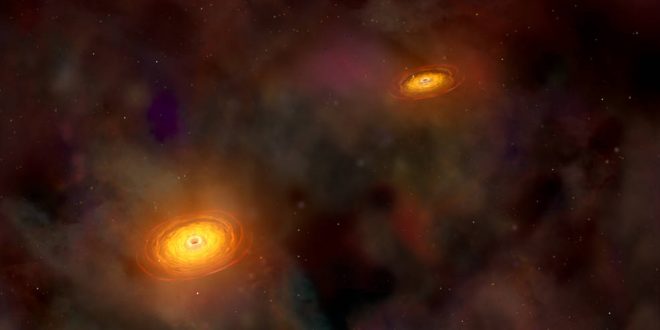 Data from the NASA’s Chandra X-ray Observatory, the Wide-Field Infrared Sky Explorer Survey (WISE), and the ground-based Large Binocular Telescope in Arizona was accumulated, which led to the finding of these black hole pairs.

“Astronomers find single supermassive black holes all over the universe,” said Shobita Satyapal, from George Mason University in Fairfax, Virginia, who led one of the two papers describing these results.

“But even though we’ve predicted they grow rapidly when they are interacting, growing dual supermassive black holes have been difficult to find,” Satyapal added.

Before this study, less than 10 pairs of growing black holes were confirmed with the help of X-ray studies which are based mostly on chance detections. The group of astronomers had to go through the data accumulated from telescopes which were detected in varying wavelengths of light in order to carry out a systematic search, a NASA statement revealed.

With the help of the data from the Sloan Digital Sky Survey (SDSS), the astronomers identified galaxies, where it appeared like a merger of two smaller galaxies, was taking place.

From this set, the researchers selected objects where the separation between the centres of the two galaxies in the data collected by the SDSS is less than 30,000 light years. The infrared colours from WISE data matched those predicted for a rapidly growing supermassive black hole.

With the help of this method, the astronomers spotted seven merging systems containing at least one supermassive black hole.

Strong X-ray emission is considered as an indication of growing supermassive black holes. These systems were analysed by the researchers with the help of Chandra.

Pairs of X-ray sources which were closely separated were detected in five systems which pointed towards the presence of two growing or feeding supermassive black holes.

The data from NASA’s Chandra X-ray Observatory and the infrared observations imply that supermassive black holes are buried in large amounts of debris and gas.

“Our work shows that combining the infrared selection with X-ray follow-up is a very effective way to find these black hole pairs,” said Sara Ellison of the University of Victoria in Canada.

“X-rays and infrared radiation are able to penetrate the obscuring clouds of gas and dust surrounding these black hole pairs, and Chandra’s sharp vision is needed to separate them,” Ellison added.

The study has indicated towards a burgeoning field of gravitational wave astrophysics.

While researchers using the Laser Interferometer Gravitational-Wave Observatory (LIGO) and the VIRGO interferometer have detected the signals of merging black holes, these black holes have been of the smaller variety weighing between 8 and 36 times the mass of the Sun, a NASA statement revealed.

The merging black holes in the centres of galaxies are much bigger. When these supermassive black holes draw even closer together, they should start producing gravitational waves.

The eventual merger of the dual supermassive black holes in hundreds of millions of years would forge an even bigger black hole.

This process would produce an astonishing amount of energy when some of the mass is converted into gravitational waves.

Web articles – via partners/network co-ordinators. This website and its contents are the exclusive property of ANGA Media Corporation . We appreciate your feedback and respond to every request. Please fill in the form or send us email to: [email protected]
Previous: Pesticide traces found in 75 percent of world honey
Next: Researchers Have a New Theory to Explain “Alien Megastructure” Star