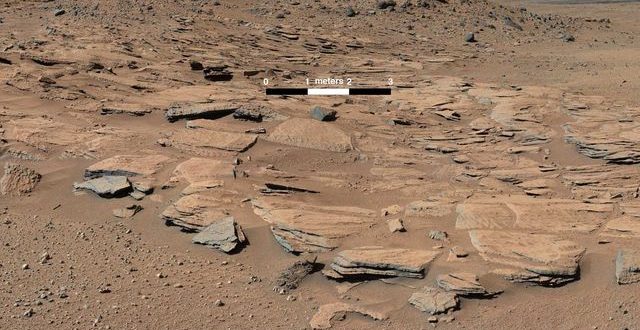 Researchers from The Open University (OU) have discovered a process that could explain the long-debated mystery of how land features on Mars are formed in the absence of significant amounts of water.

Experiments carried out in the OU Mars Simulation Chamber – specialised equipment, which is able to simulate the atmospheric conditions on Mars – reveal that Mars’ thin atmosphere (about 7 mbar – compared to 1,000 mbar on Earth) combined with periods of relatively warm surface temperatures causes water flowing on the surface to violently boil. This process can then move large amounts of sand and other sediment, which effectively ‘levitates’ on the boiling water.

This means that, in comparison to Planet Earth, relatively small amounts of liquid water moving across Mars’ surface could form the large dune flows, gullies and other features, which characterise the Red Planet.

Dr Jan Raack, Marie Skłodowska-Curie Research Fellow at The Open University, is lead author of the research; he said:

“Whilst planetary scientists already know that the surface of Mars has ‘mass-wasting’ features – such as dune flows, gullies, and recurring slope lineae – which occur as a result of sediment transportation down a slope, the debate about what is forming them continues.

“Our research has discovered that this levitation effect caused by boiling water under low pressure enables the rapid transport of sand and sediment across the surface. This is a new geological phenomenon, which doesn’t happen on Earth, and could be vital to understanding similar processes on other planetary surfaces.”

Web articles – via partners/network co-ordinators. This website and its contents are the exclusive property of ANGA Media Corporation . We appreciate your feedback and respond to every request. Please fill in the form or send us email to: [email protected]
Previous: Researchers compare twins’ DNA after one of them went to space
Next: NASA releases ‘spooky’ sounds from space for Halloween (Listen)