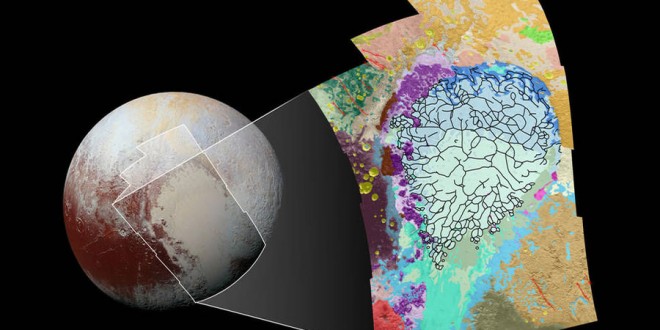 Scientists have gotten straight to the heart of Pluto, striving to explain the dwarf planet’s geological complexity and evolution. Pluto’s iconic “broken heart” region is again in the scientific spotlight on a newly-released NASA colored map.

Trying to learn more about the mysterious area and understand its surface, NASA scientists have mapped terrain on the “broken heart” region in different colors.

“This map covers a portion of Pluto’s surface that measures 1,290 miles (2,070 kilometers) from top to bottom,” a NASA press release said.

Each patch of color stands for a certain type of terrain, different in their geological morphology – uplands, plateaus, smooth lowlands, etc.

“Producing such maps is important in gauging what processes have operated where on Pluto, and when they occurred relative to other processes at work,” NASA stated.

In October, NASA said that an analysis of the data transferred by New Horizons revealed that Pluto has blue atmospheric hazes and numerous small exposed regions of ice water on its surface.

Web articles – via partners/network co-ordinators. This website and its contents are the exclusive property of ANGA Media Corporation . We appreciate your feedback and respond to every request. Please fill in the form or send us email to: [email protected]
Previous: DARPA To Unveil Robot Ship That Can Target Enemy Submarines In April “Video”
Next: Google developing more advance VR device to replace Cardboard (Video)