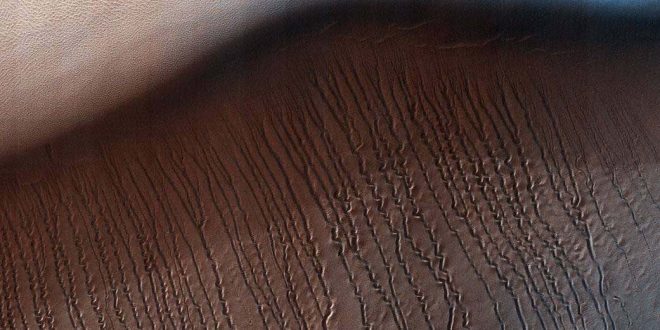 If you saw this image out of context, you might be a bit perplexed. Is it some strange macro shot of eyelashes? A weird desert landscape? It’s actually a look at the Hellas Planitia on Mars, and it shows off some distinctive, surreal-looking lines.

At around 2,200 kilometers in diameter, Hellas Planitia is the largest visible impact basin in the Solar System, and hosts the lowest elevations on Mars’ surface as well as a variety of landscapes. This image from NASA’s Mars Reconnaisance Orbiter (MRO) covers a small central portion of the basin and shows a dune field with lots of dust devil trails.

Just like on Earth, high-latitude regions on Mars are covered with frost in the winter. However, the winter frost on Mars is made of carbon dioxide ice (dry ice) instead of water ice. We believe linear gullies are the result of this dry ice breaking apart into blocks, which then slide or roll down warmer sandy slopes, sublimating and carving as they go.

The linear gullies exhibit exceptional sinuosity (the squiggle pattern) and we believe this to be the result of repeated movement of dry ice blocks in the same path, possibly in combination with different hardness or flow resistance of the sand within the dune slopes. Determining the specific process that causes the formation and evolution of sinuosity in linear gullies is a question scientists are still trying to answer. What do you think causes the squiggles?

Web articles – via partners/network co-ordinators. This website and its contents are the exclusive property of ANGA Media Corporation . We appreciate your feedback and respond to every request. Please fill in the form or send us email to: [email protected]
Previous: 10-year-old takes police on wild car chase up to 100 mph (Video)
Next: Stanford research finds link between marijuana and sex