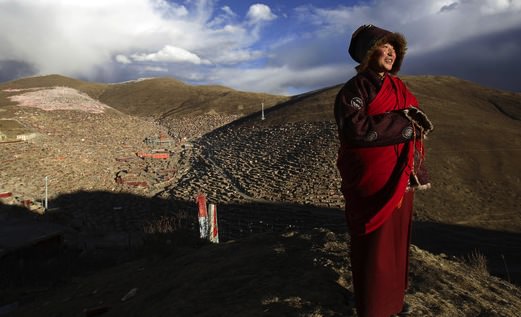 Tibetans have the unusual ability to breathe and adapt to high altitudes. Now, researchers have found that these people possess this ability thanks to a gene that they picked up when their ancient ancestors mated with a species of human they helped pushed to extinction.

This is the first time a gene from another species of human has been shown unequivocally to have helped modern humans adapt to their environment, the researchers said.

An unusual variant of a gene involved in regulating the body’s production of hemoglobin – the molecule that carries oxygen in the blood – became widespread in Tibetans after they moved onto the high-altitude plateau several thousand years ago. This variant allowed them to survive despite low oxygen levels at elevations of 15,000 feet or more, whereas most people develop thick blood at high altitudes, leading to cardiovascular problems.

“We have very clear evidence that this version of the gene came from Denisovans,” a mysterious human relative that went extinct 40,000-50,000 years ago, around the same time as the more well-known Neanderthals, under pressure from modern humans, said principal author Rasmus Nielsen, UC Berkeley professor of integrative biology. “This shows very clearly and directly that humans evolved and adapted to new environments by getting their genes from another species.”

Nielsen and his colleagues at BGI-Shenzhen in China, the world’s largest genome sequencing center, will report their findings online on July 2 in advance of publication in the journal Nature.

The gene, called EPAS1, is activated when oxygen levels in the blood drop, triggering production of more hemoglobin. The gene has been referred to as the “superathlete” gene because at low elevations, some variants of it help athletes quickly boost hemoglobin and thus the oxygen-carrying capacity of their blood, upping endurance. At high altitudes, however, the common variants of the gene boost hemoglobin and its carrier, red blood cells, too much, increasing the thickness of the blood and leading to hypertension and heart attacks as well as low birth weight babies and increased infant mortality. The variant, or allele, found in Tibetans raises hemoglobin and red blood cell levels only slightly at high elevations, avoiding the side effects seen in most people who relocate to elevations above 13,000 feet.

“We found that part of the EPAS1 gene in Tibetans is almost identical to the gene in Denisovans and very different from all other humans,” Nielsen said. “We can do a statistical analysis to show that this must have come from Denisovans. There is no other way of explaining the data.”

The researchers first reported the prevalence of a high-altitude version of EPAS1 in Tibetans in 2010, based on the sequencing of the genomes of numerous Han Chinese and Tibetans. Nielsen and his colleagues argued that this prevalence was the result of natural selection to adapt to about 40 percent lower oxygen levels on the Tibetan plateau. That is, people without the variant died before reproducing at a much higher rate than those with it. About 87 percent of Tibetans now have the high-altitude version, compared to only 9 percent of Han Chinese, who have the same common ancestor as Tibetans.

Nielsen and his colleagues subsequently sequenced the EPAS1 gene in an additional 40 Tibetans and 40 Han Chinese. The data revealed that the high-altitude variant of EPAS1 is so unusual that it could only have come from Denisovans. Aside from its low frequency in Han Chinese, it occurs in no other known humans, not even Melanesians – inhabitants of a large swath of the South Pacific – whose genomes are nearly 5 percent Denisovan. A high quality sequence of the Denisovan genome was published in 2012.

Nielsen sketched out a possible scenario leading to this result: modern humans coming out of Africa interbred with Denisovan populations in Eurasia as they passed through that area into China, and their descendants still retain a small percentage – perhaps 0.1 percent – of Denisovan DNA. The group that invaded China eventually split, with one population moving into Tibet and the other, now known as Han Chinese, dominating the lower elevations.

Nielsen and his colleagues are analyzing other genomes to pin down the time of Denisovan interbreeding, which they said probably happened over a rather short period of time.

“There might be many other species from which we also got DNA, but we don’t know because we don’t have the genomes,” Nielsen said. “The only reason we can say that this bit of DNA is Denisovan is because of this lucky accident of sequencing DNA from a little bone found in a cave in Siberia. We found the Denisovan species at the DNA level, but how many other species are out there that we haven’t sequenced?”

Nielsen was referring to the fact that a 41,000-year-old finger bone fragment discovered in the remote Denisova Cave in the Altai Mountains of Siberia was found to be that of a Denisovan only after its genome was sequenced in 2010.

Web articles – via partners/network co-ordinators. This website and its contents are the exclusive property of ANGA Media Corporation . We appreciate your feedback and respond to every request. Please fill in the form or send us email to: [email protected]
Previous: FBI hopes to identify victims in child rape case, Report
Next: Red Kangaroos Use Tail as Powerful Fifth Leg, Study