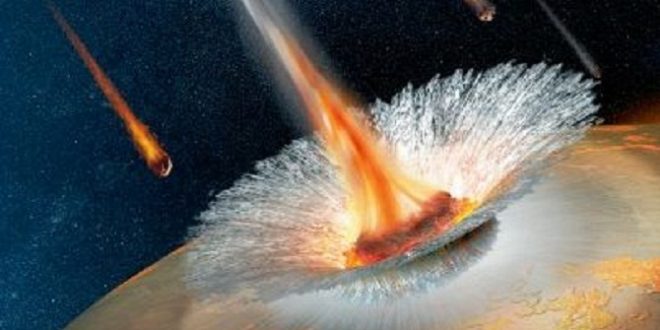 The hottest temperature ever recorded on Earth was 2,370°C (4,298°F) – just shy of half the sun’s temperature, researchers have discovered.

The record high was caused by an asteroid impact which led to the formation of the 28-kilometer diameter Mistastin Lake crater in Canada.

Researchers have long known there was a large impact in the Labrador region (the mainland portion of the Newfoundland and Labrador province) thanks to the Mistastin crater. This 17-mile (28-kilometer) depression contains Mistastin Lake, which is quite obviously an impact crater when seen from above. There’s an arcuate central island in the lake, which is the central uplift of the original impact crater, and the lake itself is roughly circular. Although, the lake is somewhat smaller than the original crater, at just under 10 miles across.

The walls of the crater have eroded over the eons, but the geological evidence clearly points to a massive object smacking into the ground there. The area around the lake is rife with melted rocks, shatter cones, and other signs of a particularly violent impact. Scientists often have trouble characterizing large impacts; there’s so much energy released that both the object and the surrounding landscape are vaporized. In the case of the Mistastin impact, there are some fascinating leftovers.

According to a new paper in Earth and Planetary Science Letters, geologists have found evidence of zircon being transformed into cubic zirconia around Mistastin crater. Zircon is a common enough mineral, but laboratory research indicates that you need temperatures in excess of 4,298 degrees Fahrenheit (2,370 degrees Celsius) to transform it into cubic zirconia. Therefore, the heat generated by this massive impact must have reached at least that warm, making it the hottest naturally occurring temperature on Earth.

The Mistastin impact is far from the largest impact in Earth’s history, but it was still big enough to have global ramifications for decades. The impact that wiped out dinosaurs 65 million years ago was larger. Certainly, the moon-forming impact in Earth’s formative years was more violent than both. It’s possible the composition of the impactor, and the bedrock in Labrador contributed to an unusually high temperature. But these larger impacts could have produced even higher temperatures, and we just don’t have evidence for it.

Web articles – via partners/network co-ordinators. This website and its contents are the exclusive property of ANGA Media Corporation . We appreciate your feedback and respond to every request. Please fill in the form or send us email to: [email protected]
Previous: Researchers Convert Optical Data into Soundwaves
Next: The Most Dangerous Sex Position For A Man, New Study