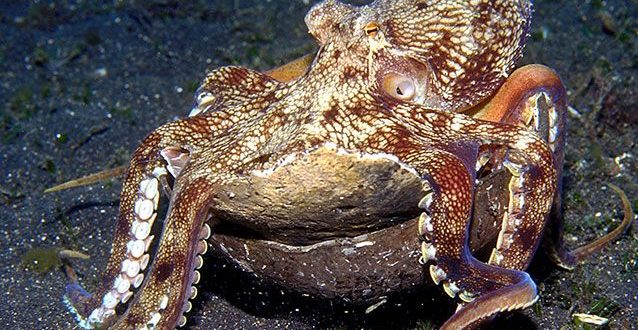 Scientists were thrilled to discover the aquatic architecture, which is reminiscent of human cities. But in a city filled with cannibal cephalopods, life is not a walk in the park.

Octopuses are usually solitary creatures, but a new site in the waters off the east coast of Australia is the home of up to 15 gloomy octopuses (Octopus tetricus) that have been been observed communicating — either directly as in den evictions or indirectly through posturing, chasing or color changes, according to findings reported in the journal Marine and Freshwater Behaviour and Physiology.

The new site is the second gloomy octopus settlement found in the area, and the discovery lends credence to the idea that octopuses are not necessarily loners.

Mating is traditionally the only interaction that occurs between males and females, and once it’s over, the octopuses go their separate ways. While little is known about the solitary lives of octopuses, a few octopus settlements — areas where multiple individuals congregate and communicate with one another — have been found in recent years. The newly-discovered settlement of gloomy octopuses, whose range extends from the waters off Sydney to New Zealand, supports the idea that octopuses can congregate and socialize under the right conditions.

“At both sites there were features that we think may have made the congregation possible — namely several seafloor rock outcroppings dotting an otherwise flat and featureless area,” said Stephanie Chancellor, a Ph.D. student in biological sciences at the University of Illinois at Chicago and an author on the paper. “In addition to the rock outcroppings, octopuses who had been inhabiting the area had built up piles of shells left over from creatures they ate, most notably clams and scallops. These shell piles, or middens, were further sculpted to create dens, making these octopuses true environmental engineers.”

The first gloomy octopus site was observed in Jervis Bay off the east coast of Australia and described in 2009 by Matthew Lawrence, an independent scholar and an author on the paper. Named Octopolis, up to 16 animals were observed interacting there. It contained several dens as well as a human-made flat object around 30 centimeters long. It was thought at the time that perhaps these octopuses required an artificial object around which to form their settlement.

The second site is located just a few hundred meters away from the first site, and has been dubbed Octlantis. The site is about 10 to 15 meters under the water’s surface and is about 18 meters in length and four meters wide. It is composed of a few patches of exposed rock and beds of discarded shells from prey animals. A total of 13 occupied and 10 unoccupied octopus dens — holes excavated into sand or shell piles — were found at the site.

The researchers dove to place four GoPro cameras at the new site to film for a day, recording 10 hours of footage that showed numerous social interactions among the inhabitants. The number of octopuses observed at the site ranged from 10 to a high of 15.

“Animals were often pretty close to each other, often within arm’s reach,” Chancellor said. Mating, signs of aggression, chasing, and other signaling behaviors were observed. “Some of the octopuses were seen evicting other animals from their dens. There were some apparent threat displays where an animal would stretch itself out lengthwise in an ‘upright’ posture and its mantle would darken. Often another animal observing this behavior would quickly swim away,” she said. This behavior could be territorial, Chancellor explained, “but we still don’t really know much about octopus behavior. More research will be needed to determine what these actions might mean.”

A great deal of energy is exerted during antagonistic behavior, and it could lead to a potential risk of injury to the octopus, according to Chancellor. “We still don’t know what the benefits are of this kind of behavior, which is linked closely to living in densely populated settlements, compared to the life of a solitary octopus.”

Web articles – via partners/network co-ordinators. This website and its contents are the exclusive property of ANGA Media Corporation . We appreciate your feedback and respond to every request. Please fill in the form or send us email to: [email protected]
Previous: The Most Dangerous Sex Position For A Man, New Study
Next: Researchers Push for 50 Nano Spacecraft to Explore 300 Asteroids