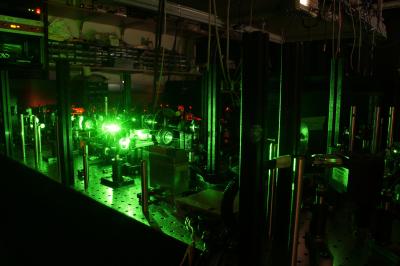 Researchers Find a way to Record Quantum Behavior of Electrons

Researchers Find a way to Record Quantum Behavior of Electrons

A team of scientists at the University of Chicago has recently developed a new technique allowing them to record the quantum mechanical behavior or a diamond’s individual electron within a nanonscale defect.

Their technique uses ultrafast pulses of laser light both to control the defect’s entire quantum state and observe how that single electron state changes over time. The work appears in this week’s online Science Express and will be published in print later this month in Science.

This research contributes to the emerging science of quantum information processing, which demands that science leave behind the unambiguous universe of traditional binary logic—0 or 1—and embrace the counterintuitive quantum world, where behavior is radically different from what humans experience every day. While people are generally content being in one place at a time, electrons can be in many states at once.
The team researches a quantum mechanical property of the electron known as spin. Much like conventional computers use the charge state of electrons to constitute bits of information, a quantum computer would use the spin state of a single electron as its quantum bit, or qubit. The work could accelerate development of quantum computing devices, and the extra computing power that would come with them, because it will be easier to identify materials that have appropriate quantum properties.

The spin system studied is known as the nitrogen-vacancy (NV) center, an atom-sized defect that occurs naturally in diamond, consisting of a nitrogen atom next to a vacant spot in the crystal lattice. “These defects have garnered great interest over the past decade, providing a test-bed system for developing semiconductor quantum bits as well as nanoscale sensors,” said team leader David Awschalom, the Liew Family Professor of Molecular Engineering at UChicago. “Here, we were able to harness light to completely control the quantum state of this defect at extremely high speeds.”

In this new technique, the researchers locate a single NV center and then illuminate it with a pair of extremely short pulses of laser light. Each pulse lasts less than a picosecond (or a millionth of a millionth of a second). The first pulse excites the quantum states of the defect-bound electron, which then change or evolve in characteristic ways. The second pulse stops that evolution, capturing a picture of the quantum state at that elapsed time.

By progressively extending the elapsed time between the two pulses, the team creates a sequence of quantum-state snapshots—a movie of how the quantum state changes in time. The elapsed time can be as short as femtoseconds (a billionth of a millionth of a second) or as long as nanoseconds (a thousandth of a millionth of a second). On the human scale, this range of time is like the difference between an hour and a century.
Having this vast range of timescales makes the technique especially valuable. The electron is susceptible and interacts with its complex local environment in many different ways, each with a characteristic timescale. Being able to test a wide range of these timescales gives a far more complete picture of the dynamics of the NV center than has been obtained previously.

“Our goal was to push the limits of quantum control in these remarkable defect systems,” explained Lee Bassett, co-lead author on the paper and now an assistant professor of electrical and systems engineering at the University of Pennsylvania, “but the technique also provides an exciting new measurement tool. By using pulses of light to direct the defect’s quantum dynamics on super-short timescales, we can extract a wealth of information about the defect and its environment.”

“It’s quite a versatile technique, providing a full picture of the excited state of the quantum defect,” said F. Joseph Heremans, a postdoctoral scholar at UChicago, the other co-lead author on the paper. “Previous work on the nitrogen-vacancy center has hinted at some of these processes, but here, simply through the application of these ultrafast pulses, we get a much richer understanding of this quantum beast.”

It’s not just a matter of observation, though. “This technique also provides a means of control of the spin state—an important precursor for any quantum information system,” said Evelyn Hu, a professor of applied physics and electrical engineering at Harvard University, who is not connected with the new work.

In addition, the method is not limited to investigating this particular defect. It could be applied to quantum states of matter in a host of materials and technologies, including many semiconductor materials. “You only have to be able to use light to transfer an electron between a ground state and an excited state,” said Awschalom.

Professor Guido Burkard, theoretical physicist at the University of Konstanz and a co-author on the paper, remarked, “This technique offers a path toward understanding and controlling new materials at the atomic level.”

Hu agrees that the technique opens many new avenues. “Each new system will pose new challenges to understanding the energy levels, local environments, and other properties, but the general approach should provide an enormous step forward for the field,” said Hu.

Web articles – via partners/network co-ordinators. This website and its contents are the exclusive property of ANGA Media Corporation . We appreciate your feedback and respond to every request. Please fill in the form or send us email to: [email protected]
Previous: Woman had cocaine in breast implants, Police
Next: Demi moore gave Tallulah Willis rehab ultimatum