Home » Press Releases » Researchers separate a particle from its properties 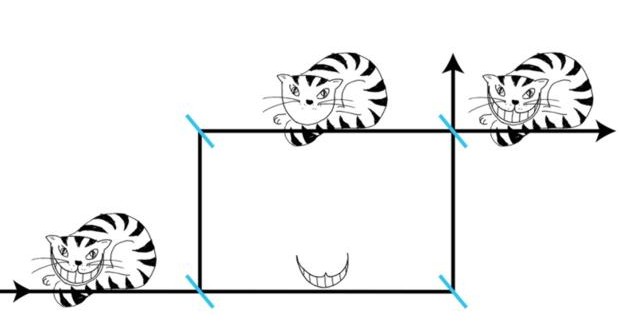 Researchers separate a particle from its properties

Researchers separate a particle from its properties

Two years after scientists trapped the Higgs boson in the bowels of the Swiss Alps, another of the great puzzles of quantum physics has been caught in captivity. First proposed last year, the “Cheshire Cat” paradox plunges scientists into the world of Alice’s Adventures in Wonderland, Lewis Carroll’s book.

At Different Places at Once

According to the law of quantum physics, particles can be in different physical states at the same time. If, for example, a beam of neutrons is divided into two beams using a silicon crystal, it can be shown that the individual neutrons do not have to decide which of the two possible paths they choose. Instead, they can travel along both paths at the same time in a quantum superposition.

“This experimental technique is called neutron interferometry”, says Professor Yuji Hasegawa from the Vienna University of Technology. “It was invented here at our institute in the 1970s, and it has turned out to be the perfect tool to investigate fundamental quantum mechanics.”

To see if the same technique could separate the properties of a particle from the particle itself, Yuji Hasegawa brought together a team including Tobis Denkmayr, Hermann Geppert and Stephan Sponar, together with Alexandre Matzkin from CNRS in France, Professor Jeff Tollaksen from Chapman University in California and Hartmut Lemmel from the Institut Laue-Langevin to develop a brand new quantum experiment.

The experiment was done at the neutron source at the Institut Laue-Langevin (ILL) in Grenoble, where a unique kind of measuring station is operated by the Viennese team, supported by Hartmut Lemmel from ILL.

Neutrons are not electrically charged, but they carry a magnetic moment. They have a magnetic direction, the neutron spin, which can be influenced by external magnetic fields.

First, a neutron beam is split into two parts in a neutron interferometer. Then the spins of the two beams are shifted into different directions: The upper neutron beam has a spin parallel to the neutrons’ trajectory, the spin of the lower beam points into the opposite direction. After the two beams have been recombined, only those neutrons are chosen, which have a spin parallel to their direction of motion. All the others are just ignored. “This is called postselection”, says Hermann Geppert. “The beam contains neutrons of both spin directions, but we only analyse part of the neutrons.”

… and Where is the Grin?

Things get tricky, when the system is used to measure where the neutron spin is located: the spin can be slightly changed using a magnetic field. When the two beams are recombined appropriately, they can amplify or cancel each other. This is exactly what can be seen in the measurement, if the magnetic field is applied at the lower beam – but that is the path which the neutrons considered in the experiment are actually never supposed to take. A magnetic field applied to the upper beam, on the other hand, does not have any effect.

“By preparing the neurons in a special initial state and then postselecting another state, we can achieve a situation in which both the possible paths in the interferometer are important for the experiment, but in very different ways”, says Tobias Denkmayr. “Along one of the paths, the particles themselves couple to our measurement device, but only the other path is sensitive to magnetic spin coupling. The system behaves as if the particles were spatially separated from their properties.”

This counter intuitive effect is very interesting for high precision measurements, which are very often based on the principle of quantum interference. “When the quantum system has a property you want to measure and another property which makes the system prone to perturbations, the two can be separated using a Quantum Cheshire Cat, and possibly the perturbation can be minimized”, says Stephan Sponar.

The idea of the Quantum Cheshire Cat was first discovered by Prof. Yakir Aharonov and first published by Aharonov’s collaborator, Prof. Jeff Tollaksen (both now from Chapman University), in 2001. The measurements which have now been presented are the first experimental proof of this phenomenon. The experimental results have been published in the journal “Nature Communications”.

Web articles – via partners/network co-ordinators. This website and its contents are the exclusive property of ANGA Media Corporation . We appreciate your feedback and respond to every request. Please fill in the form or send us email to: [email protected]
Previous: UK : Driverless cars are announced at MIRA site
Next: Colbert mocks Sarah Palin channel (Video)