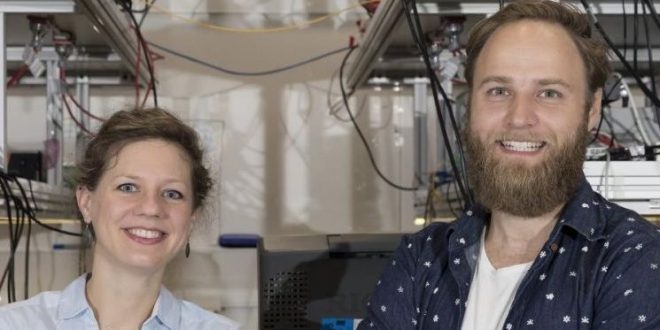 Researchers slow down data to make it easier to catch

In a breakthrough that could help usher in a new generation of super-fast light-based computers, engineers in Australia have succeeded in storing light-based information as sound waves on a computer chip.

Photons (the elementary particles of light) are hard to handle at the microchip level, so they are translated into electrons. This takes a fair amount of energy, creates a lot of heat and as systems become more complex and data hungry, they can become bulky and expensive, and susceptible to electromagnetic radiation.

What if the chip could work with photons? Photonic chips, or photonic integrated circuits (PICs), promise a new paradigm in information processing and are being pursued by the likes of IBM and Intel.

Their potential in telecommunications, optical fibre networks and cloud computing data centres is huge. But there’s a problem: light is just too fast.

“For this to become a commercial reality, photonic data on the chip needs to be slowed down so that they can be processed, routed, stored and accessed,” explains Moritz Merklein, from the ARC Centre of Excellence for Ultrahigh bandwidth Devices for Optical Systems (CUDOS).

Together with his colleague Dr Birgit Stiller, he has demonstrated for the first time a solution that’s making a big noise in the scientific community: delay the data in the photons by storing it as sound.

“The information in our chip in acoustic form travels at a velocity five orders of magnitude slower than in the optical domain,” said Stiller, research fellow at the University of Sydney and supervisor of the project.

“It is like the difference between thunder and lightning.”

The researchers – working at the School of Physics and the Sydney Nanoscience Hub at the University of Sydney where CUDOS is headquartered – have dramatically slowed digital information carried as light waves by transferring the data into sound waves in an integrated circuit, or microchip.

“Building an acoustic buffer inside a chip improves our ability to control information by several orders of magnitude,” Merklein said.

The chip was fabricated at the Australian National University’s Laser Physics Centre, a node of CUDOS. It is the first time this has been achieved.

“Storing or delaying optical signals has been a major driving force for a wide variety of research efforts as it offers new possibilities in all-optical processing and enhanced light–matter interactions,” the authors write in their paper – A chip-integrated coherent photonic-phononic memory – published yesterday in Nature Communications. “An optical buffer that is able to maintain the coherence of the optial signal … and is able to operate at multiple wavelengths would greatly enhance the capacity of photonic integrated circuits and optical interconnects.”

While research in recent years has greatly increased the storage time of photon in sound vibrations, and maintained coherence when translating it back, there had been limitations.

To be useful the ‘buffer’ needs at least a gigahertz bandwidth, to harness multiple wavelength channels to increase capacity, and be able to be integrated onto a chip.

Those limitations have been overcome with the Sydney researchers demonstration, and what’s more the method works at room temperature and can easily connect with other microchip components.

“Our system is not limited to a narrow bandwidth. So unlike previous systems this allows us to store and retrieve information at multiple wavelengths simultaneously, vastly increasing the efficiency of the device,” Stiller said.

This century has been dubbed ‘the century of nanophotonics’ (photonics and nanotechnology). The associated technologies have uses in communications networks, improving radar technology, diagnosing disease, and reducing energy consumption in devices and data centres.

“This is an important step forward in the field of optical information processing as this concept fulfils all requirements for current and future generation optical communication systems,” said Professor Benjamin Eggleton, CUDOS director and co-author.

Web articles – via partners/network co-ordinators. This website and its contents are the exclusive property of ANGA Media Corporation . We appreciate your feedback and respond to every request. Please fill in the form or send us email to: [email protected]
Previous: Intel And Waymo, expand self-driving car collaboration
Next: Researchers Find Hottest Temperature On Earth In Meteorite Impact