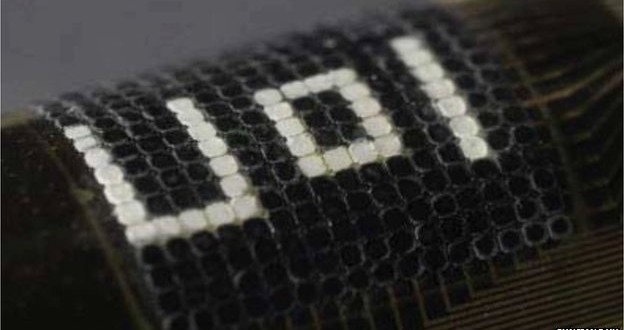 A new electronic camouflage inspired by octopus and squid skin can alter its appearance to match its surroundings.

“I think we’ve put together the key elements that are needed,” says John Rogers, head of materials research the University of Illinois at Urbana-Champaign.

The adaptive optoelectronic camouflage system, which Rogers developed with scientists from Illinois, Texas, and China, consists of several components piled on top of one another in very thin layers and divided up into pixels. The top layer contains a kind of dye that is normally black but becomes transparent with a small increase in temperature. Beneath that is a layer of white reflective silver. Next down is an array of silicon diodes that heat up when current runs through them. Separated from that layer by a sheet of silicone lies an array of ultrathin silicon photodetectors on a transparent polymer substrate.

When light strikes a photodetector, it sends a signal that drives current into the diode above it; the diode heats up, causing the black dye to turn transparent. This lets the white layer of silver show through. As the pattern of ambient light changes, the array of pixels match the pattern of light striking the structure.

The system, which works in a manner similar to the skin of cephalopods like the cuttlefish, grew out of the research of Roger Hanlon, a biologist at Brown University and the Marine Biological Laboratory at Woods Hole, Mass. Hanlon, Rogers, and their colleagues describe the work in the current issue of Proceedings of the National Academies of Science.

The work was sponsored by the U.S. Navy, which has an obvious interest in camouflage, but Rogers says there could be a range of industrial and consumer applications, including mood lighting and sensors that change color based on exposure to ultraviolet light. Though the team worked with black and white to demonstrate the concept, Rogers says the technique could also be used to display colors—and might incorporate actuators or even a camera. “We view it as sort of a general set of engineering approaches,” Rogers says.

Web articles – via partners/network co-ordinators. This website and its contents are the exclusive property of ANGA Media Corporation . We appreciate your feedback and respond to every request. Please fill in the form or send us email to: [email protected]
Previous: Hospitalizations, deaths for heart disease fall : Study Finds
Next: One dead, 1 seriously injured in Jane St. shooting