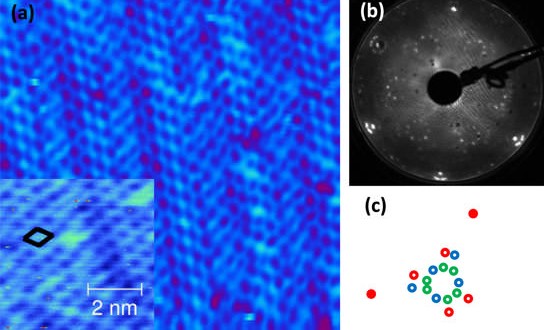 Scientists synthesized a material that has been dubbed “the cousin graphene.”

The 2D material is called germanene, and is made up of just a single layer of atoms. The material is expected to have impressive electrical and optical properties and could be extremely useful in the electronics industry, the Institute of Physics reported.

Germanene was first proposed in 2009 but has, up until now, remained elusive. Since then, graphene has been developed further whilst other 2D materials, such as silicene, have been synthesized.

Much like silicene, the proposed method for synthesising germanene is to deposit individual germanium atoms onto a substrate under high temperatures and in an ultra-high vacuum.

The breakthrough by the European research team was made in parallel with an independent team from China who have reported evidence that germanene has been synthesized onto a platinum substrate.

In the current study the researchers discovered, rather serendipitously, that gold could also be used as a substrate, an event which co-author of the study Professor Guy Le Lay, from Aix-Marseille University, described as ‘like passing through the looking glass’.

‘Following our synthesis of graphene’s other cousin, silicene, we thought it natural to try and produce germanene in the same way, by despositing germanium onto a silver substrate,’ Le Lay said.

‘This attempt failed, so I decided to switch to a gold substrate, having remembered my old work from my PhD thesis, in which gold was grown onto a germanium substrate. I thought it would be worth trying the other way around.’

After depositing the germanium atoms onto a gold substrate, the researchers were able to confirm that the material was in fact germanene by taking spectroscopy measurements and density functional theory (DFT) calculations, which investigated the electronic structure of the material.

The material was also observed under a scanning tunnelling microscope, which revealed the characteristic honeycomb structure of a 2D material.

The researchers believe that with further development it may be possible for germanene to be grown on thin gold films sitting on top of a flexible substrate, which would certainly be cheaper than platinum and could allow germanene to be synthesized on a large scale.

Additionally, the unique properties of germanene could make it a robust two-dimensional topological insulator, particularly up to room temperature, opening up the possibility of using the material in quantum computing.

Professor Le Lay continued: ‘We have provided compelling evidence of the birth of nearly flat germanene—a novel, synthetic germanium allotrope which does not exist in nature. It is a new cousin of graphene.

‘The synthesis of germanene is just the very beginning of a long quest. Indeed, success in the synthesis was not easy to achieve and quite demanding. A considerable amount of work is now needed to further characterize the electronic properties of the material.’

Co-author of the study Professor Angel Rubio, from the University of the Basque Country, added: ‘An important aspect of our study is that we have increased the lego of 2D materials that we can use to build a whole host of artificial solid materials with a wide range of differing properties.”‘

Web articles – via partners/network co-ordinators. This website and its contents are the exclusive property of ANGA Media Corporation . We appreciate your feedback and respond to every request. Please fill in the form or send us email to: [email protected]
Previous: Sleep And Anxiety Drugs May Increase Risk For Alzheimer’s, Study
Next: Bilal Philips : Canadian preacher linked to terrorists found in Davao