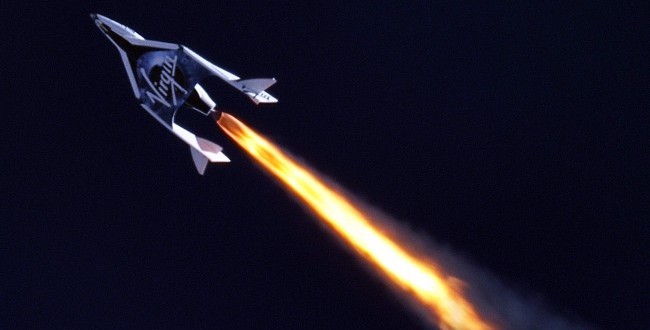 Richard Branson has long said that he’d be on board Virgin Galactic’s first commercial space tourism flight, and he’s now confirmed that will take place sometime next year with his two adult children along for the ride (a bit of a delay from the company’s original 2011 target). That trip will of course be made with the company’s SpaceShipTwo craft, which has already completed a number of test flights, and which is capable of flying 100 kilometers (or just over 60 miles) above the Earth for a planned two and a half hour flight with five minutes of weightlessness.

The second flight took place high over the Mojave Desert, home of Scaled Composites. SpaceShipTwo was tested on a 20 second burn reaching Mach 1.43 and hitting a maximum altitude of 69,000 feet before testing the “feather” re-entry system. The re-entry system allowed SpaceShipTwo to glide easily and slowly to an appropriate altitude before extending its wings and gliding down for a landing. Taking a large step towards Richard Branson’s Virgin Galactic being the first commercial space fliers.

While companies like Elon Musk’s SpaceX and Sierra Nevada’s Space Systems are looking to take over launching satellites and other objects into space, as well as providing rides to and from the International Space Station, Virgin Galactic is looking at the commercial movement of people through space to their destinations. In fact, Virgin Galactic has already filed for a commercial space system operator license with the FAA. While the FAA has accepted the application, the agency is now watching SpaceShipTwo’s progress very closely before actually awarding such a status to the private company.

It is Sir Branson’s hope that the first commercial flight, which he intends to be aboard for, can take place Christmas day 2014. There still seems to be a ways to go before that will come to pass, but it is exciting to think about commercial space flight finally becoming a reality.

While it seems the novelty of five minutes of weightlessness could potentially be worth the $250,000 price tag, of which Virgin Galactic has already sold over 650 tickets, it is hardly going to be something the average commuter is going to be able to afford. Although, when commercial flights first became available they were equally as high in price and today they are fairly inexpensive. Beyond the weightlessness experience, it seems much more interesting that one could go from Los Angeles to Paris in a few short hours.

This is revolutionizing the ways in which we will be traveling our tiny planet, yet there is still a ways to go before large amounts of people are going to be able to afford a ride into space, before gliding back down to Earth. Regardless, it seems that Richard Branson is going to achieve his dream of being the first commercial company to provide rides into space with Virgin Galactic.

Web articles – via partners/network co-ordinators. This website and its contents are the exclusive property of ANGA Media Corporation . We appreciate your feedback and respond to every request. Please fill in the form or send us email to: [email protected]
Previous: Roman Abramovich : installs anti-paparazzi laser photo shield on Giant Yacht
Next: Kerry Washington : Hides Baby Bump In Floral Frock (VIDEO – PHOTO)