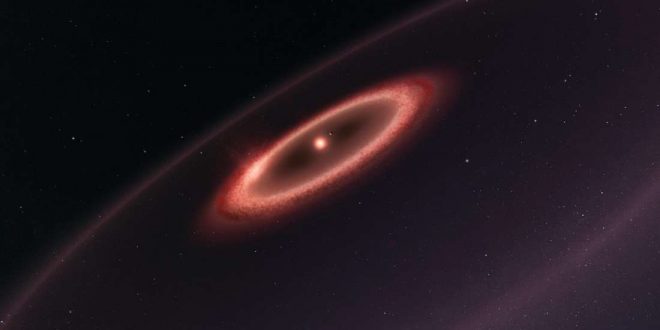 Scientists have detected at least one cold dust belt surrounding the closest star to the Sun, Proxima Centauri. The presence of such a feature suggests there might be more than one planet orbiting Proxima.

Proxima Centauri is the closest star to the Sun. It is a faint red dwarf lying just four light-years away in the southern constellation of Centaurus (The Centaur). It is orbited by the Earth-sized temperate world Proxima b, discovered in 2016 and the closest planet to the Solar System. But there is more to this system than just a single planet. The new ALMA observations reveal emission from clouds of cold cosmic dust surrounding the star.

The lead author of the new study, Guillem Anglada, from the Instituto de Astrofísica de Andalucía (CSIC), Granada, Spain, explains the significance of this find: “The dust around Proxima is important because, following the discovery of the terrestrial planet Proxima b, it’s the first indication of the presence of an elaborate planetary system, and not just a single planet, around the star closest to our Sun.”

Dust belts are the remains of material that did not form into larger bodies such as planets. The particles of rock and ice in these belts vary in size from the tiniest dust grain, smaller than a millimetre across, up to asteroid-like bodies many kilometres in diameter.

Dust appears to lie in a belt that extends a few hundred million kilometres from Proxima Centauri and has a total mass of about one hundredth of the Earth’s mass. This belt is estimated to have a temperature of about –230 degrees Celsius, as cold as that of the Kuiper Belt in the outer Solar System.

There are also hints in the ALMA data of another belt of even colder dust about ten times further out. If confirmed, the nature of an outer belt is intriguing, given its very cold environment far from a star that is cooler and fainter than the Sun. Both belts are much further from Proxima Centauri than the planet Proxima b, which orbits at just four million kilometres from its parent star.

Guillem Anglada explains the implications of the discovery: “This result suggests that Proxima Centauri may have a multiple planet system with a rich history of interactions that resulted in the formation of a dust belt. Further study may also provide information that might point to the locations of as yet unidentified additional planets.”

Proxima Centauri’s planetary system is also particularly interesting because there are plans — the Starshot project — for future direct exploration of the system with microprobes attached to laser-driven sails. A knowledge of the dust environment around the star is essential for planning such a mission.

Web articles – via partners/network co-ordinators. This website and its contents are the exclusive property of ANGA Media Corporation . We appreciate your feedback and respond to every request. Please fill in the form or send us email to: [email protected]
Previous: Research reveals women more likely to file for divorce than men
Next: Bees can be left or right-handed like humans, says new research