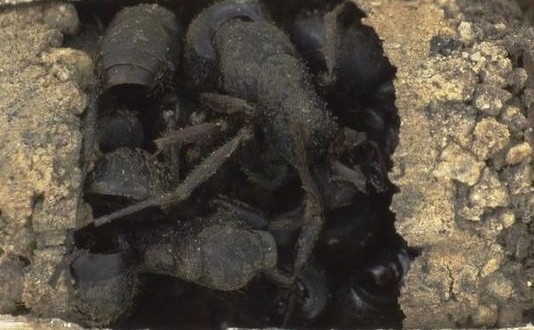 A new wasp species uses the bodies of dead ants to protect its nest, researchers have found.

The so-called Bone-house wasp, Deuteragenia ossarium, employs the chemical signals of the insect corpses to ward off predators by stuffing them into crevices on the outside of the nest.

The new species of wasp, which preys on spiders, was discovered in Jiangxi Province in south east China.

No other such strategy has ever been discovered before in the entire animal kingdom. “When I first saw one of these ant-filled chambers, I thought immediately of the ancient Great Wall of China. Just like the Great Wall protected the Chinese Empire against attacks from raiding nomad tribes, the ant wall protects the offspring of this newly described wasp species from enemies,” recounts Staab. The scientists published their findings in the international journal PLOS ONE.

The new species with the scientific name Deuteragenia ossarium belongs to the family of spider wasps. In most species of this family, each of the females builds her own nest consisting of several cells. Each cell is filled with a single spider that has previously been paralyzed by a sting and on which the larva feeds. The same is also true of the newly discovered “bone-house wasp,” which in contrast to all other known spider wasp species does not leave the last cell empty but fills it with dead ants.

The scientists conducted experiments demonstrating that the ant wall is a very effective means of protecting the nest. The offspring of the “bone-house wasp” are attacked far less frequently than those of other wasps from the same ecosystem. The researchers assume that the unique ant wall gives the nest a smell similar to the nest of a well-fortified ant species, thus scaring off potential enemies. The precise defense mechanism is still unclear and is the subject of current research. “The discovery of a new species raises new questions. We want to understand why biodiversity is important for a functioning ecosystem,” says Klein. The research group “Biodiversity-Ecosystem Functioning (BEF) China,” which conducted the research, is funded by the German Research Foundation.

Web articles – via partners/network co-ordinators. This website and its contents are the exclusive property of ANGA Media Corporation . We appreciate your feedback and respond to every request. Please fill in the form or send us email to: [email protected]
Previous: UBC : Stand up for hip health research
Next: Psoriasis Risk Tied to High Blood Pressure in Women, Study