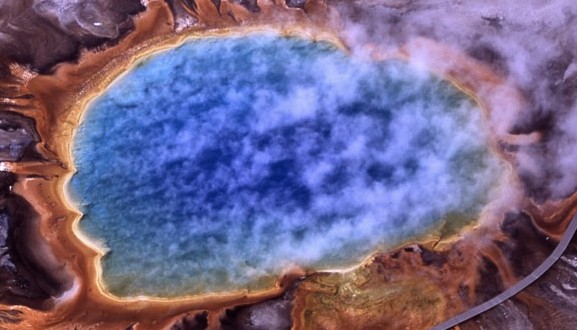 Scientists have revealed the supervolcano lurking beneath Yellowstone National

Scientists studying a massive volcano beneath Yellowstone National Park have determine that it is possibly 2.5 times larger than previously thought. When the “supervolcano” last erupted, 640,000 years ago, it blanketed North America in suffocating ash and drastically altered the planet’s climate.

Even more alarming are the scientists’ findings on when exactly this supervolcano could erupt. By studying the layers of rock in the national park, scientist believe the Yellowstone supervolcano has erupted at least three times in the past at a frequency of about one in every 700,000 years. The first occurred 2.1 million years ago, the second 1.3 million years ago and — here’s the kicker — the most recent one occurred roughly 640,000 years ago. Meaning we could be due for a supervolcano eruption pretty much any day between now and the next 60,000 years.

While there’s always a chance North Americans will find another way to destroy ourselves and our continent in the interim (or that the frequency estimate is bunk), the effect of a Yellowstone eruption would be catastrophic. Soil samples reveal that the last time she exploded, it covered the entire continent in ash, rivers of lava flowed for hundreds of miles and the smoke cloud was screwing with the planet’s climate for hundreds of years.

Anyway, even if Yellowstone doesn’t throw the country into some Cormac McCarthy-esque hellscape, several other researchers took a look at other volcanic eruptions on the same stretch of the continent that occurred between 8 million and 12.5 million years ago. What they found were fewer of these ancient volcanoes than originally expected, but that their devastating effects were much greater than originally believed. So, basically: Something’s gonna blow sometime and you should probably call your mother more.

Web articles – via partners/network co-ordinators. This website and its contents are the exclusive property of ANGA Media Corporation . We appreciate your feedback and respond to every request. Please fill in the form or send us email to: [email protected]
Previous: Mystery US man giving up to $10000 ‘Tips for Jesus’
Next: Kidney transplant gives former NFL player Donald Jones a 2nd chance