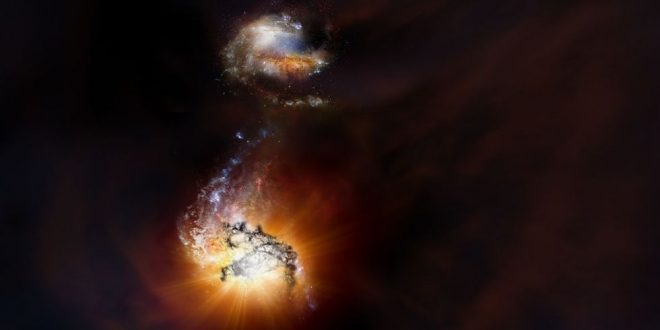 Two ginormous galaxies almost 13 billion light years away are about to smash into each other in the most extreme merger event of its kind. And astronomers on Earth have a front row view.

Using the ALMA radio telescope in Chile, scientists have spotted what they believe to be the largest galaxy merger ever discovered. The two galaxies, collectively called ADFS-27, are both incredibly bright and massive, what scientists call ‘superluminous starburst galaxies.’ They are also ancient, situated 12.7 billion light-years away, making them among the oldest galaxies in the universe.

“Finding just one hyper-luminous starburst galaxy is remarkable in itself. Finding two of these rare galaxies in such close proximity is truly astounding,” said Dominik Riechers, an astronomer at Cornell University in Ithaca, New York, and lead author on a paper appearing in the Astrophysical Journal. “Considering their extreme distance from Earth and the frenetic star-forming activity inside each, it’s possible we may be witnessing the most intense galaxy merger known to date.”

The ADFS-27 galaxy pair is located approximately 12.7 billion light-years from Earth in the direction of the Dorado constellation. At this distance, astronomers are viewing this system as it appeared when the universe was only about one billion years old.

Astronomers first detected this system with the European Space Agency’s Herschel Space Observatory. It appeared as a single red dot in the telescope’s survey of the southern sky. These initial observations suggested that the apparently faint object was in fact both extremely bright and extremely distant. Follow-up observations with the Atacama Pathfinder EXperiment (APEX) telescope confirmed these initial interpretations and paved the way for the more detailed ALMA observations.

With its higher resolution and greater sensitivity, ALMA precisely measured the distance to this object and revealed that it was in fact two distinct galaxies. The pairing of otherwise phenomenally rare galaxies suggests that they reside within a particularly dense region of the universe at that period in its history, the astronomers said.

The new ALMA observations also indicate that the ADFS-27 system has approximately 50 times the amount of star-forming gas as the Milky Way. “Much of this gas will be converted into new stars very quickly,” said Riechers. “Our current observations indicate that these two galaxies are indeed producing stars at a breakneck pace, about one thousand times faster than our home galaxy.”

The galaxies — which would appear as flat, rotating disks — are brimming with extremely bright and massive blue stars. Most of this intense starlight, however, never makes it out of the galaxies themselves; there is simply too much obscuring interstellar dust in each.

This dust absorbs the brilliant starlight, heating up until it glows brightly in infrared light. As this light travels the vast cosmic distances to Earth, the ongoing expansion of the universe shifts the once infrared light into longer millimeter and submillimeter wavelengths, all thanks to the Doppler
effect.

ALMA was specially designed to detect and study light of this nature, which enabled the astronomers to resolve the source of the light into two distinct objects. The observations also show the basic structures of the galaxies, revealing tail-like features that were spun-off during their initial encounter.

The new observations also indicate that the two galaxies are about 30,000 light-years apart, moving at roughly several hundred kilometers per second relative to each other. As they continue to interact gravitationally, each galaxy will eventually slow and fall toward the other, likely leading to several more close encounters before merging into one massive, elliptical galaxy. The astronomers expect this process to take a few hundred million years.

“Due to their great distance and dustiness, these galaxies remain completely undetected at visible wavelengths,” noted Riechers. “Eventually, we hope to combine the exquisite ALMA data with future infrared observations with NASA’s James Webb Space Telescope. These two telescopes will form an astronomer’s ‘dream team’ to better understand the nature of this and other such exceptionally rare, extreme systems.”

Web articles – via partners/network co-ordinators. This website and its contents are the exclusive property of ANGA Media Corporation . We appreciate your feedback and respond to every request. Please fill in the form or send us email to: [email protected]
Previous: What Is This Martian Lake Doing In Canada?! (Video)
Next: Robert Mugabe in custody as army takes control in Zimbabwe