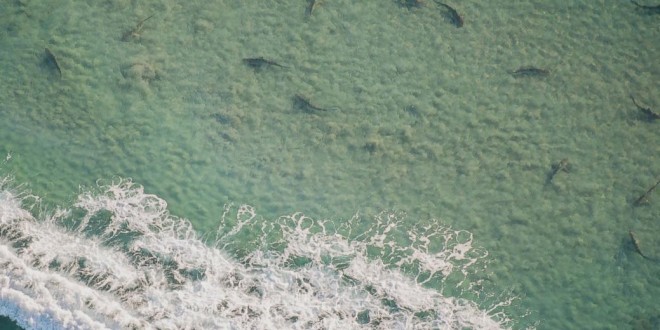 Sharks migrating off coast of Florida by the thousands (Video)

Sharks migrating off coast of Florida by the thousands “Video”

Tens of thousands of sharks have taken a break from their serious shark studies to congregate off the coast of Florida this week.

The blacktip sharks are being spotted in far greater numbers than usual, clogging the coastline around Palm Beach.

Thankfully nobody has been bitten by the sharks yet and as they are considerably smaller than Great Whites, attacks are usually non-fatal.

Lifeguards haven’t yet closed Palm Beach, which is still packed with visitors.

But there are understood to be fewer people venturing into the water than usual.

“For the most part, if you look historically, we have relatively few bites on people by blacktips in this area,” Prof Kajiura said.

“Most of the bites have been further north in Daytona.”

The news comes as it was revealed that there were more shark attacks in 2015 than in any other year since records began.

The number of humans attacked by sharks rose to 92, resulting in six deaths, according to figures from the International Shark Attack File in Florida.

Surfers amounted for almost half of the victims, with swimmers making up 42 per cent.

The figure, which includes only unprovoked attacks so does not count fishermen, is the highest since the database began, and 10 more than in the previous record year, 2000.

The blacktip shark is found in warm coastal waters around the world—where it often encounters people. The animal frequents bays, estuaries, coral reefs, and the shallow waters off beaches and river mouths. During summer some blacktip sharks migrate to typically cooler waters, including those off Cape Cod, Massachusetts, while others stay put in warmer equatorial waters year-round. Blacktips have been observed to live in sexually segregated schools except during the mating season.

Blacktip sharks are sometimes spotted above the water. They leap above the surface, rotate several times, and splash down on their backs. This dramatic display is sometimes part of a stealthy feeding method they use to strike at schools of bony fishes near the water surface. The sharks hurl themselves at the fish from below. Blacktip sharks supplement their diets with skates, stingrays, squids, and some crustaceans. These sharks have also been known to follow fishing boats and feed on discarded bycatch.

In 2008 DNA evidence confirmed that a female shark fertilized her own egg, impregnating herself without the help of a male. It’s not entirely known how rare this event, called parthenogenesis, is among blacktip or other sharks.

During more conventional breeding blacktips offer scientists a fine opportunity for observation. The sharks gather in aggregations to set up pup nurseries in shallow, near-shore waters. Female blacktip sharks produce four to ten live, free swimming pups per litter. They begin to reproduce at age four or five and continue to do so every other year throughout their lives, which can last longer than a decade. Young blacktips live in the coastal nurseries as juveniles, which likely helps them avoid predation from larger sharks.

But the shark’s preference for in-shore waters makes it particularly vulnerable to coastal development, which eliminates critical habitat such as nursery sites, and commercial fishing, which is particularly widespread in the southeastern United States, Mexico, and India. Worldwide, the blacktip is listed by the IUCN as near threatened, largely because it’s considered quite tasty and often targeted for its meat and its fins, which are used to make shark fin soup.

Web articles – via partners/network co-ordinators. This website and its contents are the exclusive property of ANGA Media Corporation . We appreciate your feedback and respond to every request. Please fill in the form or send us email to: [email protected]
Previous: PJ Lakhanpal: Ontario teen goes to Parliament Hill as prime minister for day
Next: Google Unveils “Gmailify” Offering Gmail To Non-Gmail Accounts (Video)