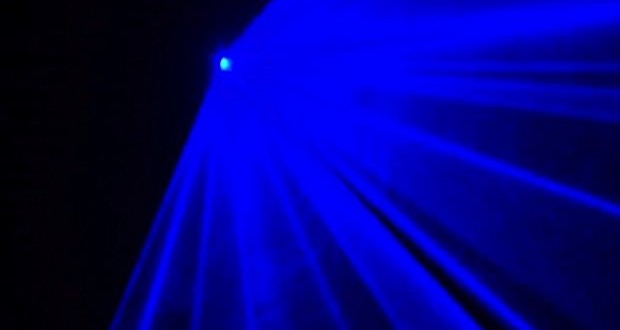 It’s relatively easy to trap molecules using lasers, yet they persist in rotating as if they were not trapped at all.

But a new laser cooling technique has helped a team from Northwestern University stop a trapped, rotating molecule dead in its tracks.

“It’s counterintuitive that the molecule gets colder, not hotter when we shine intense laser light on it,” said Brian Odom, who led the research. He is an assistant professor of physics and astronomy in the Weinberg College of Arts and Sciences. “We modify the spectrum of a broadband laser, such that nearly all the rotational energy is removed from the illuminated molecules. We are the first to stop molecular tumbling in such a powerful yet simple way.”

It is not very difficult to trap many types of molecules and hold them precisely in place, Odom said, but they stubbornly persist in rotating just as much as if they were not trapped at all. Using their customized laser, he and his colleagues cooled singly charged aluminum monohydride molecules from room temperature to – 452 F in a fraction of a second. The abrupt temperature drop stopped the molecules’ normally persistent tumbling motion in its tracks.

Such control of molecules, of their rotational and vibrational states, is essential to using molecules in the construction of superfast quantum computers — machines whose processing power would be exponentially faster than today’s computers.

The new technique is faster, easier and more practical and efficient than techniques developed thus far to control molecules. Details are published today in Nature Communications.

Previously, it was long assumed that far too many lasers would be required to cool molecular rotations. However, broadband laser light contains many different frequency components, and the Northwestern researchers used those components to custom design a laser for their task. They filtered out the part of the spectrum that causes molecules to start spinning faster — and become hotter — while leaving in the useful frequency components that slows the molecules down — and also cools them.

Also noteworthy, Odom said, is that they cooled the molecule to its very lowest quantum rotational state using a room-temperature apparatus, not the cumbersome liquid helium cryostats some other researchers have used.

“In our quantum world, every type of motion has only certain allowed energies,” said Odom, an atomic physicist. “If I want to slow down a molecule, quantum mechanics tells me that it happens in steps. And there is a very lowest step that we can get the molecule down to, which is what we’ve done.”

Odom and his team chose to work with singly charged aluminum monohydride molecules because the molecule does not vibrate when it interacts with a laser.

“By choosing the right molecule we were able to stop the molecules from rotating without worrying about the vibrations,” Odom said.

Aluminum monohydride molecules are inexpensive and could be used in wide range of applications, beyond quantum computing.

“There is a lot you can do if you get one species of molecule under control, such as we’ve done in this study,” Odom said.

In addition to quantum information processing, applications that could springboard off this new ability to control molecular rotors include ultra-cold quantum-controlled chemistry and tests of whether fundamental constants are truly static or if they vary in time.

Web articles – via partners/network co-ordinators. This website and its contents are the exclusive property of ANGA Media Corporation . We appreciate your feedback and respond to every request. Please fill in the form or send us email to: [email protected]
Previous: Researchers call for investigation of mysterious cloud-like collections in cells
Next: Human brain can be trained to prefer healthy foods, study says