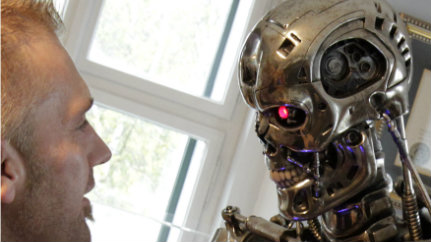 Members of the Campaign to Stop Killer Robots have this week called on the government of Canada to support the creation of new international law to pre-emptive ban fully autonomous weapons or ‘killer robots.’ The call was made as part of an outreach effort in the Canadian capital of Ottawa by Mines Action Canada, a co-founder of the global Campaign to Stop Killer Robots.

In a press release, Erin Hunt of Mines Action Canada urged the Canadian government to ”to take action now to ensure that international law is strengthened and future-proofed against these technological developments.” The executive director of Mines Action Canada Paul Hannon recalled Canada’s leadership on landmines in leading the Ottawa Process initiative that resulted in the adoption of the 1997 Mine Ban Treaty to warn that we “cannot afford to wait until we have another global castrophe to deal with problematic weapon systems.”

Canada should support new international law to pre-emptive ban fully autonomous weapons of “killer robots” said Mines Action Canada today as it launched an effort to address the weapons. They were joined by experts from the global Campaign to Stop Killer Robots, a new an international coalition of concerned civil society groups.

“Fully autonomous weapons could fundamentally alter the nature of armed conflict so we are calling on the Government of Canada to take action now to ensure that international law and human law is strengthened and future-proofed against these technological developments,” said Erin Hunt, Program Officer, Mines Action Canada. “Only a pre-emptive ban can protect civilians and prevent possible disaster.”

Mines Action Canada is a co-founder and a member of the leadership of the global Campaign to Stop Killer Robots, an coalition of more than 50 non-governmental organizations in two dozen countries that was launched in April 2013. The campaign is calling for a comprehensive ban on the development, production and use of autonomous weapons that select and attack targets without any human intervention. This prohibition should be achieved through an international treaty, as well as through national laws and other measures, to enshrine the principle that there must always be meaningful and accountable human control over decisions to use violent force against a human being.

Canadians are familiar with the idea of “killer robots” from science fiction films and comic books, but few realize that countries are beginning to work on creating these terrifying devices. Over the past decade, the expanded use of unmanned armed vehicles or drones has dramatically changed warfare, bringing new humanitarian and legal challenges. While unmanned armed vehicles have a pilot at the controls making decisions over targeting and decisions to use force, fully autonomous weapons would remove the human from the decision-making process.

International attention to the issue has intensified since Human Rights Watch issued its “Losing Humanity” report in November 2012, looking at the challenges fully autonomous weapons would pose to the protection of civilians and rule of law. A report issued by a UN special rapporteur in April 2013, described technical, legal, ethical, moral, and other concerns with fully autonomous weapons and called for an immediate moratorium on the weapons. Both reports state that robots with full lethal autonomy have not yet been developed, but cite research underway in countries including the US, China, Israel, South Korea, Russia, and UK.

“Allowing machines to determine who should live or die in a conflict is an issue that concerns all states. The United States has articulated its policy on fully autonomous weapons, but we need more countries to develop national policy on this emerging topic of international concern, including Canada.” said Peter Asaro, Co-Chair of the International Committee for Robot Arms Control. “Scientists, roboticists and academics from across Canada know that autonomous robots could benefit humanity greatly, but there’s increasing concern that a line be drawn to ensure that robots are never weaponized.”

Representatives from more than 100 nations—including Canada—are gathering at the United Nations in Geneva next month together with campaigners to discuss questions relating to the emerging technology of “lethal autonomous weapons systems.” Mines Action Canada encourages the government to take an active role in the Convention on Conventional Weapons experts meeting and a leadership role over the longer-term.

“We need to act now to begin the process of creating new law to ensure that the rapid technological development of weapons does not cross moral and ethical lines or endanger innocent civilians,” said Ian Kerr, University of Ottawa Professor and Canada Research Chair in Ethics, Law and Technology. “It is time for Canada and Canadians to take action.”

“Through Canada’s leadership on the landmine issue, we learned that the international community cannot afford to wait until we have another global castrophe to deal with problematic weapon systems. Pre-emptive action will prevent a dramatic change in the nature of warfare and the resulting humanitarian disaster,” said Paul Hannon, Executive Director of Mines Action Canada. “Canadians are uniquely positioned to take on a leadership role in efforts to ensure that humans always have meaningful control over life and death decisions in conflict.”

This week’s events are the first steps towards a national conversation in Canada about how the world should respond to the possibility of autonomous weapons. Mines Action Canada has created an online petition to Keep Killer Robots Fiction, which calls on the Government of Canada to immediately prohibit the development and deployment of fully autonomous weapons (killer robots) in Canada and to support efforts to create a pre-emptive global ban on the technology. The petition can be found online and through the Take Action page on our website www.stopkillerrobots.ca.

Web articles – via partners/network co-ordinators. This website and its contents are the exclusive property of ANGA Media Corporation . We appreciate your feedback and respond to every request. Please fill in the form or send us email to: [email protected]
Previous: Chicago : School girl feud ends in death
Next: US : FDA Wants High-Risk Label for Transvaginal Mesh