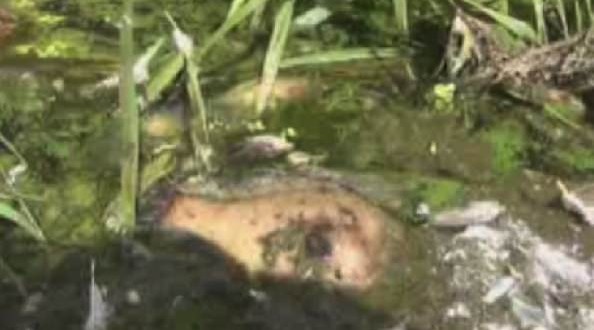 Thousands of fish were discovered dead in Langley City’s Brydon Lagoon over the long weekend.

It was the worst fish kill ever recorded at the 29-year-old lagoon.

She believes the fish kill was caused by an algae bloom last week.

“Some of the European carp in there were a good one to two feet long, so they’ve been in there quite some time. Possibly from people not wanting them in their backyards, ponds or home aquariums, and then releasing them in the lagoon.”

A statement posted on the society’s Facebook page says “suspected low dissolved oxygen is the culprit from an algae bloom that occurred in the lagoon last week. Algae blooms are common at this time of year in closed systems as a result of high nutrient levels (perhaps from lawn fertilizers etc) and increased water/air temperatures. Oxygen levels fluctuate depending upon the growth cycle of the algae.”

The society says the lagoon is not suitable salmon habitat, and many of the fish killed were invasive species such a European Carp, Catfish and Pumpkin Sunfish.

Web articles – via partners/network co-ordinators. This website and its contents are the exclusive property of ANGA Media Corporation . We appreciate your feedback and respond to every request. Please fill in the form or send us email to: [email protected]
Previous: Women wear bikinis to support mom mocked for stretch marks (Video)
Next: Missing Dundee woman committed suicide (Video)