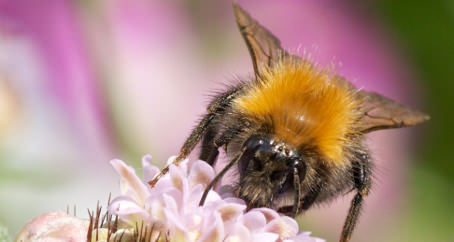 But amid the gloom, one plucky species – the tree bumblebee (Bombus hypnorum) – seems to have been bucking the trend.

Now, scientists at the University of East Anglia appear to have worked out why.

A new study published today shows that Tree Bumblebees are associated with built-up areas and that these areas form a large part of their habitat use.

These markedly different habitat and foraging preferences set this species apart from other common British bumblebee species – which could explain how Tree Bumblebees have managed to colonise much of the UK while many other bumblebee species have been declining.

The Tree Bumblebee (Bombus hypnorum) has spread to nearly all of England and Wales since its first appearance in southern England in 2001.

The research team recorded the bumblebee species and the flowering plants visited by the bees at a large number of sites across southern Norfolk, including both urban and rural sites, over a three month period.

When combined with landscape mapping data, these observations revealed that the Tree Bumblebee was much more likely to be found in built-up areas and, to a lesser extent, areas with woodland nearby.

In contrast, none of the other five bumblebee species studied shared the combination of favoured landscape features found in the Tree Bumblebee.

The results are the first evidence that, in its new range in the UK, the Tree Bumblebee is associated with built-up areas such as towns and villages and that these areas form a large part of its habitat use.

An association between Tree Bumblebees and human habitation has previously been suspected from natural history observations. Along with an association with trees, it is likely to stem from the Tree Bumblebee’s habit of nesting in cavities above the ground, which is unusual among British bumblebees.

Lead author Liam Crowther, from UEA’s School of Biological Sciences, said: “This research implies that the Tree Bumblebee’s remarkable success is due, in part, to favouring a suite of resources different to those used by the bumblebee species that are already widespread in the UK.

“While an association with human habitation has been suspected for some time, this study provides clear evidence of this link and suggests that urban and suburban areas may be facilitating the Tree Bumblebee’s remarkably rapid natural colonisation of the UK.”

The Tree Bumblebee was first recorded in the UK in the New Forest in 2001 and has since expanded its range approximately 600 km northwards through most of England and Wales and into southern Scotland, a rate of expansion of nearly 50 km per year

In continental Europe and Asia, however, its range extends from western France to Japan and as far north as the Kola Peninsula in arctic Russia and as far south as the Himalayas. It is thought to have arrived in the UK naturally from populations in northern France.

‘Habitat and forage associations of a naturally colonising insect pollinator, the Tree Bumblebee Bombus hypnorum’ is published in PLoS One on September 26, 2014.

Web articles – via partners/network co-ordinators. This website and its contents are the exclusive property of ANGA Media Corporation . We appreciate your feedback and respond to every request. Please fill in the form or send us email to: [email protected]
Previous: Apple : ‘Shellshock’ internet bug has potential to wreak havoc
Next: Denzel Washington’s ‘The Equalizer’ Nabs $12.6 Million Friday, Report