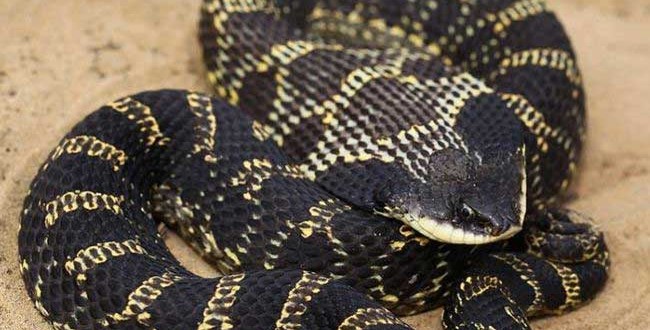 Have you seen an Eastern Hog-nosed Snake? Scott Gillingwater, Species at Risk Biologist with the Upper Thames River Conservation Authority (UTRCA) is asking for the public’s help in protecting this harmless snake. This Threatened species is protected provincially and federally.

Scott wants people to report observations of Eastern Hog-nosed Snakes by contacting him at gillingwaters @ thamesriver.on.ca or 519-451-2800 ext 236. Scott is interested in when and where in the Upper Thames River watershed the species was seen.

“There are only a handful of observations each year in the Upper Thames River watershed,” said Scott. “The population appears to be dropping quickly.”

These remarkable creatures are disappearing due to habitat loss, persecution and road mortality. Snakes are often needlessly killed out of fear. The Eastern Hog-nosed Snake is often targeted to be killed by people frightened by its defensive displays that mimic venomous species. This species can also vary in colour and pattern considerably.

“These behaviours are intended to persuade a predator to leave the snake alone rather than making it dinner,” explains Scott. “The snake gets into big trouble, though, when people see its defensive act, mistakenly think that it’s dangerous and decide to kill it.”

The truth is there are no snake species in the Upper Thames River watershed that can harm people, although a few do look and act similar to venomous species. The Hog-nosed is a master of fakery and puts on quite a show. Not only does its colouring and thick body resemble a rattlesnake, but some of its defensive behaviours make people think it is dangerous. These harmless behaviours include:

“If the snake still feels threatened, it will roll over and play dead!” says Scott. “Unless you’re a toad, which is the main food of the Eastern Hog-nosed, you have nothing to fear.”

Web articles – via partners/network co-ordinators. This website and its contents are the exclusive property of ANGA Media Corporation . We appreciate your feedback and respond to every request. Please fill in the form or send us email to: [email protected]
Previous: Offshore Gas Platform Fire, No injuries
Next: SaskPower : First large-scale carbon capture goes online