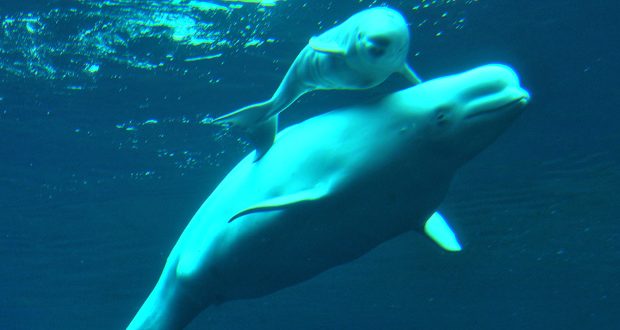 Vancouver Aquarium to end display of beluga whales by 2029

Vancouver Aquarium to end display of beluga whales by 2029

The Vancouver Aquarium plans to bring back beluga whales by the spring of 2019, despite not knowing what killed two of the mammals last November.

“For 50 years the Vancouver Aquarium has worked to protect beluga whales in the wild, by introducing the species to Canadians who might never have otherwise heard of it, and with research and understanding gained with animals here on site and in the field,” said Dr. John Nightingale, CEO and president. “The work we’re doing with this vulnerable species is critical, and as a marine science centre with conservation as our mission, we believe we have an obligation to continue it.”

Today, the Aquarium announced a new 12-year beluga conservation program centred on a small group of non-breeding beluga whales that will be brought back to Vancouver from peer accredited institutions to participate in an expanded Marine Mammal Research Program. By the end of 2029, the Aquarium intends to discontinue its display of beluga whales, and this proactive and important on-site conservation research program will come to an end at Vancouver Aquarium.

Over the past three months, Vancouver Aquarium has conducted a thorough assessment and review of its Canada’s Arctic exhibit and marine mammal research program, which includes beluga whale studies. While the ongoing investigation of the beluga deaths in late 2016 will continue for several more months, the Aquarium has set a new course for the future for its beluga conservation program.

“In alignment with our values as a conservation organization, we are committed to providing the best care possible for our animals, and on increasing the currently limited body of scientific knowledge on this keystone Arctic species,” said Nightingale. He points to the Mexican vaquita porpoise as an example of a species that, with now just 30 individuals left, is on the brink of extinction because of a lack of awareness and long-delayed action to save them.

The beluga conservation program is aimed at preventing a similar fate for Canada’s white whales. The program will include a research-first protocol, giving visitors a first-hand look at critical research taking place at the Aquarium, as well as in education and public outreach. Scientific research with animals at the Aquarium will help inform current conservation work taking place with wild beluga populations in the Arctic and St. Lawrence Estuary.

The program will include an expanded investment in the Marine Mammal Research Program, to study cetaceans such as beluga whales in a controlled marine science environment, and a significantly expanded beluga habitat to accommodate the unique lifestyle of belugas and the needs of researchers who will be studying these animals up close.

The expanded habitat will also support Vancouver Aquarium’s role as the only Marine Mammal Rescue Centre facility in Canada, which includes a team of first responders whose role is to take on emergency rescues for stranded, sick or injured marine mammals along Canada’s coastlines. For more than 50 years, Vancouver Aquarium’s rescue team has developed hands-on experience treating and caring for ailing whales and dolphins. Caring for cetaceans on-site provides the rescue team with ongoing access to animals, enabling the team to continue advanced medical care training needed to perform emergency rescues.

The Aquarium will also expand its collaboration with scientific partners, such as the Group for Research and Education on Marine Mammals (GREMM), UBC, and Fisheries and Oceans Canada to better understand the rapid decline of the endangered St. Lawrence beluga population. When this unique, proactive and important beluga conservation program comes to an end in December 2029, the Aquarium will instead focus its beluga conservation efforts further afield with the intention of applying its scientific knowledge to saving this iconic Canadian species.

Web articles – via partners/network co-ordinators. This website and its contents are the exclusive property of ANGA Media Corporation . We appreciate your feedback and respond to every request. Please fill in the form or send us email to: [email protected]
Previous: Snakes stolen from Thorold residence
Next: Drug treatment could combat hearing loss, says new study