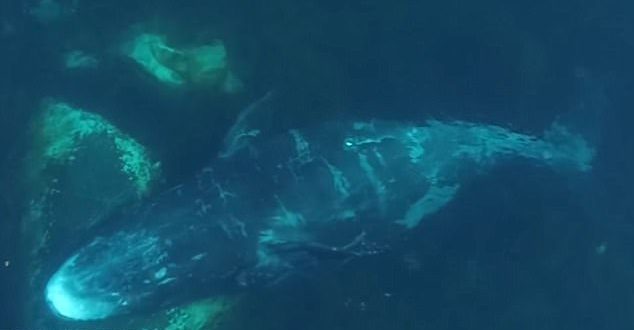 Whales migrate thousands of miles to scratch an itch (Video)

Whales migrate thousands of miles to scratch an itch (Watch)

Off the coast of northern Canada, on the very edge of the Arctic Circle, there is a bay where whales gather. Each summer bowhead whales come here en masse, and will do throughout their 200-year lifespan.

“This was an incidental observation,” said Sarah Fortune, a PhD student at UBC’s Institute for the Oceans and Fisheries and lead author of a new study based on the findings. “We were there to document their prey and feeding behaviour, but we noticed some strange behaviour near the shore.”

Fortune and her colleagues — William Koski, a whale biologist with LGL Limited, and local Inuit hunters and fishers from Pangnirtung – watched from a boat as the whales turned on their sides and waved their flippers and tails in the air. It was clear the whales weren’t there just to feed.

When the researchers sent drones up to record the animals from above, they saw large boulders underwater and realized that the whales were rubbing against rocks to remove dead skin.

“We now know that Cumberland Sound serves as a habitat for feeding and moulting,” said Fortune. “Very little is known about moulting in any of the large whale species.”

The warmer coastal waters of summer might help facilitate moulting, Fortune says. Ocean temperatures are expected to rise, and the change could have implications for the timing, duration and energy needed for moulting, as well as the whales’ diets.

As oceans change, relatively large-bodied, fatty Arctic crustaceans known as zooplankton ­­ ¾ the preferred prey of bowhead whales ¾ could move to new habitats further north while smaller-bodied, temperate species that are lower in energy are likely to dominate the waters. Scientists don’t know how whales will adapt to the changing environment.

Fortune hopes to conduct further studies to determine whether bowhead whales moult primarily during summer months, and throughout their range.

Web articles – via partners/network co-ordinators. This website and its contents are the exclusive property of ANGA Media Corporation . We appreciate your feedback and respond to every request. Please fill in the form or send us email to: [email protected]
Previous: Researchers think life on Earth may have come from outer space
Next: Man Plans to Fly in Homemade Rocket to Prove Earth is Flat (Video)