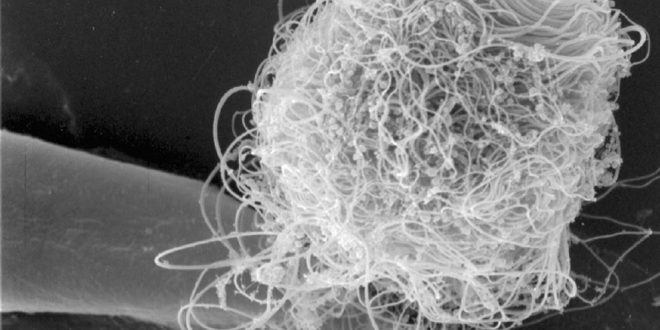 Nature indeed has a funny way of balancing the ecosystem. Did you know that the animal with the longest sperm is also among the animals with the shortest lifespan? Meet the tiny fruit fly.

An international team of researchers lead by the University of Zurich now provides the first conclusive explanation for the evolution of such giant sperm. On the one hand, larger sperm are able to displace their smaller competitors from the female reproductive tract, generating a competitive advantage in fertilizing the eggs. On the other hand, female promiscuity increases the success of fertilization by larger males, which can afford to produce more of the longer sperm than their smaller counterparts.

In the animal kingdom, sperm usually are considerably smaller than eggs, which means that males can produce far more of them. Large numbers of tiny sperm can increase the probability of successful fertilization, especially when females mate with several males. This is because the competition among sperm from different males to fertilize the few eggs increases as sperm become more abundant. This sperm competition spurs sexual selection after mating, favoring the best sperm in the female reproductive tract.

Therefore, it is astonishing that males of certain animal species produce only very few, but gigantic sperm. “The record holder is Drosophila bifurca: Although this fruit fly is only a few millimeters long, its sperm reach an impressive length of almost six centimeters,” says Stefan Lüpold, an evolutionary biologist at the University of Zurich. However, such examples contradict the common understanding of sexual selection because fewer sperm vying to fertilize an egg should relax the selection pressure on sperm to be more successful than their competitors. If only a few sperm are transferred to females as in fruit flies, selection—and thus also the evolution of longer sperm—is expected to be weakened or even halted.

Sexual selection has a major impact on sperm length

A study led by Stefan Lüpold and published in the journal Nature now provides the first explanation for the development of such giant sperm. Together with Scott Pitnick and other scientists from Syracuse University and George Washington University in the US, he managed to demonstrate that sexual selection has a major influence on the evolution of sperm length in fruit flies. The scientists combined experimental, quantitative genetic and comparative studies on sexual traits in various Drosophila species.

The study revealed that, on the one hand, different characteristics and processes of sperm uptake, storage and use in the female reproductive tract favor longer sperm. The longer the sperm become, however, the fewer of them can be produced and transferred. Consequently, females have to mate more frequently to ensure fertilization of their eggs. And each mating creates an opportunity for sexual selection via sperm competition. “In fruit flies, for instance, longer sperm are really good at displacing their competitors from the female reproductive tract, which gives them an advantage in the competition for fertilization. Sexual selection thus favors longer sperm,” explains Stefan Lüpold, first author of the study.

On the other hand, sperm length is influenced by female preferences prior to mating. Small males can invest less in sperm production and therefore use up their sperm reserves after only few copulations. Only large, healthy males that are favored by females can afford to produce more sperm despite the increased energetic costs of longer sperm. As a result, only large males benefit from the frequent mating opportunities. Thanks to this increased reproductive success, the genes for longer sperm are able to spread in the population, which ultimately drives the evolution of longer sperm. These complex relationships can maintain, if not intensify, sexual selection even when only very few sperm end up competing for fertilization.

These new findings reveal that the general understanding of sexual selection needs to be broadened. The evolution of sperm is ultimately based on similar processes as other male sexual traits such as horns to frighten away rivals and ornaments to attract females. “Compared to these and numerous other exaggerated sexual traits, fruit-fly sperm are probably the most extreme example in the animal kingdom,” finds Lüpold. In the case of Drosophila bifurca, they are around 20 times longer than the male itself and thus transmitted as tightly coiled balls.

Web articles – via partners/network co-ordinators. This website and its contents are the exclusive property of ANGA Media Corporation . We appreciate your feedback and respond to every request. Please fill in the form or send us email to: [email protected]
Previous: Netflix’s ‘The Little Prince’ gets release date, watch the new trailer now!
Next: Canadian class-action suit over baby powder, Report