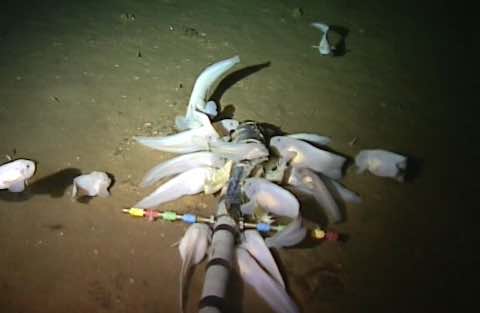 The world’s deepest fish has been captured on camera by scientists at the University of Aberdeen.

The new finding was just one of several new species discovered, as well as the first footage of the mysterious ‘supergiant’ amphipod filmed alive.

The footage was recorded using the UK’s deepest diving vehicle – the Hadal-Lander – a vehicle designed and built entirely in Aberdeenshire, Scotland.

An international team of marine biologists, geologists, microbiologists and geneticists, including those from the University of Aberdeen’s Oceanlab, have just returned from the first detailed study of the Mariana Trench aboard Schmidt Ocean Institute’s Research Vessel Falkor.

The team completed an unprecedented92 deployments of deep-sampling equipment across the entire depth range of the trench; 5000 m – 10,600 m.

The video footage, captured by scientists from Oceanlab depicts a type of snailfish at depths of 8145 metres deep – the greatest depth a fish has ever been observed, beating their own 2008 record by nearly 500 metres.

The team had already discovered a new species of snailfish living between 6000 and 8000m, itself a depth record, but it was an elusive and extremely fragile second species that had them surprised.

This new finding was just the icing on the cake. Also captured on video was the extremely rare ‘supergiant’ amphipod, an extremely large crustacean that was recovered by traps off New Zealand in 2012.

This new footage shows the supergiants swimming, feeding and fending off other would-be predators with its large body size and protective tail.
Dr Jamieson said: “Knowing these creatures exist is one thing, but to watch them alive in their natural habitat and interacting with other species is truly amazing, we have learnt a great deal.”

The goal of the 30-day Hadal Ecosystem Studies (HADES) expedition was to characterize the environments, animals, ecological and geological processes of the deepest area of the world’s ocean.

The expedition, led by the University of Hawaii, departed from other Mariana trench research by sampling a broad spectrum of environments rather than solely focusing on the deepest point.

Dr. Jeff Drazen, co-chief scientist from Hawaii expressed the drive behind this method, “Many studies have rushed to the bottom of the trench but from an ecological view that is very limiting. It’s like trying to understand a mountain ecosystem by only looking at its summit”.

For the University of Aberdeen, this has been a major success. This trip was their 14th expedition to the deep trenches where they managed to amass the greatest volume of video ever taken at these depths, 105 hours in total. Aside from the new deepest fish record and supergiant observations, they filmed many other species of fish, setting new depth records for three other fish families.

They also successfully reached the bottom of the Sirena deep at 10,545m, solidifying their deep-sea lander, known as the ‘Hadal-Lander’ as the UKs deepest diving vehicle.

Dr Jamieson added: “We are particularly proud of this vehicle given it was designed and almost entirely built in villages in Aberdeenshire in the Northeast of Scotland.”

Wendy Schmidt, co-founder of the Schmidt Ocean Institute was delighted with the success of the expedition.

She said: “Rarely, do we get a full perspective of the ocean’s unique deep environments. The questions that the scientists will be able to answer following this cruise will pave the way for a better understanding of the deep sea, which is not exempt from human impact.”

Web articles – via partners/network co-ordinators. This website and its contents are the exclusive property of ANGA Media Corporation . We appreciate your feedback and respond to every request. Please fill in the form or send us email to: [email protected]
Previous: Computer Virus Shuts Down B.C. Government Email Accounts
Next: Dog skins turned into leather in China (Video Viral)