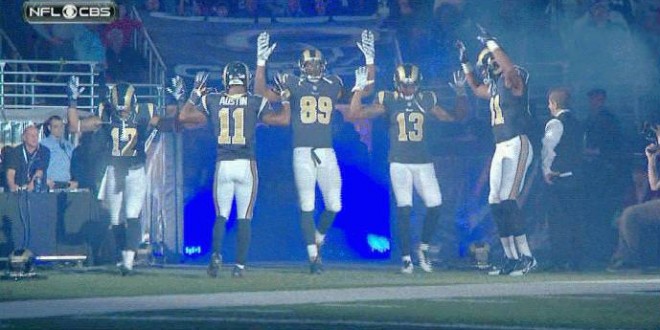 Bar boycotts Rams? The Time Out Sports Bar & Grill announced Monday that it will no longer have happy hour during Rams’ games after five St. Louis players did their “hands up” gesture prior to Sunday’s home game against the Raiders.

In a post on its Facebook page on Monday, Time Out Sports Bar & Grill, a beer and burger joint in the city’s Tower Grove South neighborhood, said it would strip its walls and happy hour signs of all St. Louis Rams memorabilia. It also urged customers to “stand up to thugs who destroy our community,” a reference to the violent protests that followed a grand jury’s decision not to indict Officer Darren Wilson with a crime related to shooting Brown, an unarmed black teenager, dead this past August. 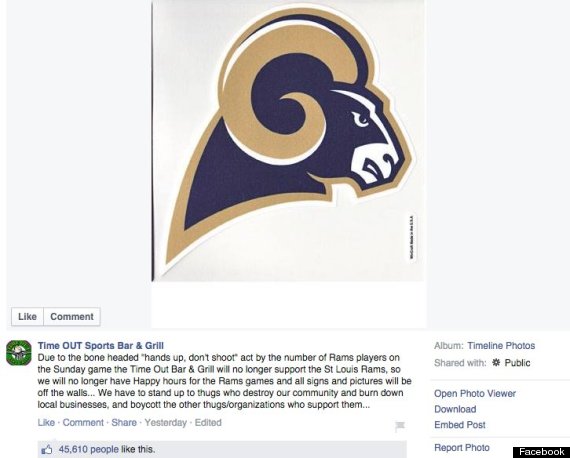 In a later post, the bar announced its new allegiance to the Kansas City Chiefs. 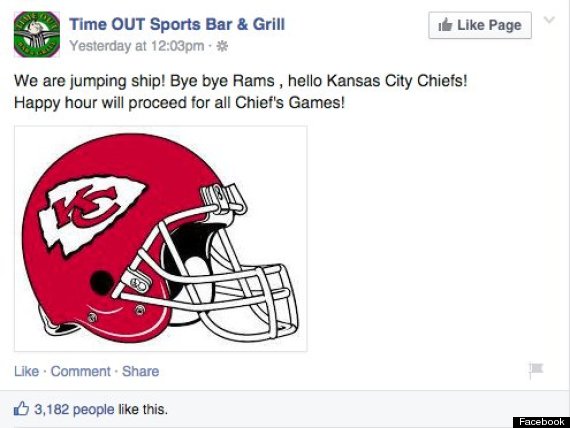 Under fire from some commenters, Time Out later posted a third update defending freedom of speech. It claimed it was not taking sides in the Ferguson debate, but disagreed with “bringing the protest to a nationwide professional sporting event.” 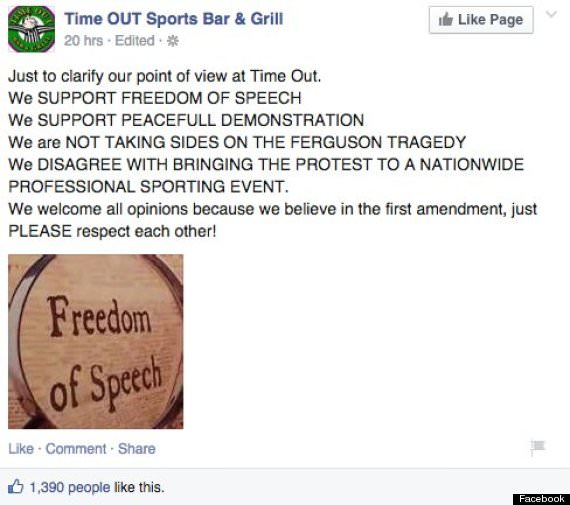 Fives Rams players on Sunday made the gesture associated with the protest chant “hands up, don’t shoot” — a reference to what some believe Brown said before he was fatally shot during an altercation with Wilson, who resigned last week.

The bar’s initial post inspired a flurry of comments — some in support of the move, others calling for a boycott in response to the change. On Yelp, reviews of a similar tone poured in from users in St. Louis and other cities.

“We respect and understand the concerns of all individuals who have expressed views on this tragic situation,” NFL spokesman Brian McCarthy said in a statement to USA TODAY Sports.

The police officer’s association issued a letter late Sunday condemning the players’ actions as “tasteless, offensive and inflammatory” given a grand jury’s decision not to indict Ferguson police officer Darren Wilson in the fatal shooting of black teenager Michael Brown.

A spokesman for the St. Louis Rams says the team was unaware of the demonstration before the game.

The Business Manager with the St. Louis Police Officers Association, Jeff Roorda, told KSDK officers sacrificed time with their families to provide extra security during Sunday’s game. Roorda said he wants to have a conversation with NFL managers and leaders with the NFL’s Players Association.

Five Rams players raised their hands as they walked out of the tunnel onto the field at the Edwards Jones Dome before Sunday’s game against the Oakland Raiders. Roorda called the action “a slap in the face”

“Law enforcement was there yesterday at the Rams game making sure that the players and fans were safe,” he said. “The Rams and the NFL were on the phone all week with the St. Louis Police Department wanting to get assurance that the game was going to be free from disruption and the violent elements that have participated in the protest in Ferguson.”

Five Rams players raised their hands as they walked out of the tunnel onto the field at the Edwards Jones Dome before Sunday’s game against the Oakland Raiders.

Web articles – via partners/network co-ordinators. This website and its contents are the exclusive property of ANGA Media Corporation . We appreciate your feedback and respond to every request. Please fill in the form or send us email to: [email protected]
Previous: Kamloops RCMP officer shot in British Columbia
Next: More doctors using electronic records, National Physician Survey