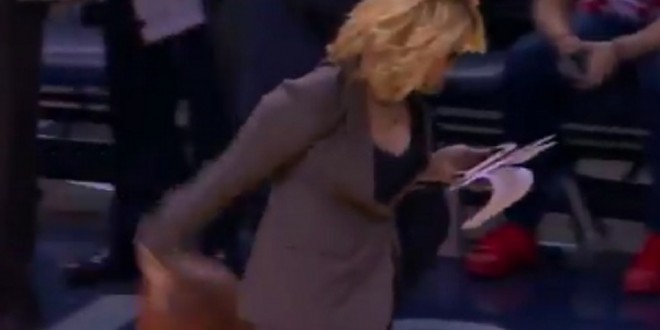 Doris Burke shows off her handles while wearing heels (Video)

Doris Burke shows off her handles while wearing heels ‘Video’

Doris Burke showed why she’s an absolute boss and so lovable during an NBA game on Saturday.

Current ESPN reporter has played point guard for the Providence Friars Women’s Basketball team and has even set a record for all-time career assists. Apparently, she still got her handles which she exhibited during her coverage of the Golden State Warriors-Memphis Grizzlies game, Saturday night.

The amazing thing about this is she did it casually while wearing heels and holding some notes and her phone on one hand.

Web articles – via partners/network co-ordinators. This website and its contents are the exclusive property of ANGA Media Corporation . We appreciate your feedback and respond to every request. Please fill in the form or send us email to: [email protected]
Previous: World Bank Opens Its Wallet for Climate Change “Report”
Next: Texas Teacher Arrested For Assaulting Student (Video)