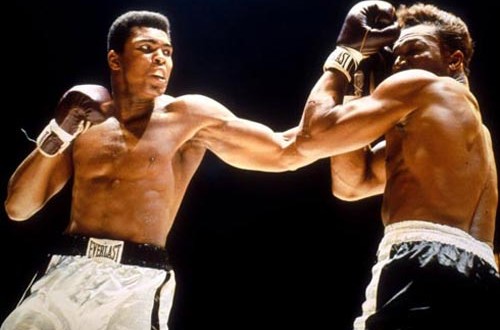 All of us boxing people realize evening is here and night will soon befall us.”—Muhammad Ali

He has been sick forever, but no man seems more alive than Muhammad Ali.

Rumor sometimes seems like boxing’s coin of the realm, yet no matter how counterfeit needs to be treated as such. Distressing news, if it is indeed news, has come to us via Rupert Murdoch’s The Sun, the biggest circulation newspaper in the UK..

Muhammad Ali’s brother, Rahman, recently told The Sun that Ali is on death’s doorstep and that his last days, rather than being a peaceful passage from this realm to the next, have been poisoned by his wife Lonnie.

Family business is family business and things are never as they appear, so there may or may not be some truth to the allegation that a feud fueled by Lonnie is tearing the family apart.

Rahman said Ali would be “mad as hell” if he knew what was going on, and that “The worst thing to happen is not the illness, but his wife.”

No one disputes Lonnie’s loyalty to Muhammad, not even Rahman Ali. They have been married for 26 years and she has sacrificed her life for her husband’s welfare. It may be that she questions Rahman’s motives, as do we all, just as she has questioned the motives of others who have used Ali to further their own objectives. But what dedicated spouse under the circumstances would not?

During his interview Rahman sobbed that he would rather his brother died to escape his suffering. “My brother can’t speak,” he said. “He doesn’t recognize me. He’s in a bad way. He’s very sick. It could be months, it could be days. I don’t know if he’ll last the summer. He’s in God’s hands. We hope he gently passes away.

“He told me before he got really bad that he’s in no pain. He grabbed my arm and whispered, ‘Rah, I’ve achieved everything I’ve ever wanted to accomplish. Don’t cry for me, I’m in no pain.’ It’s best he goes now. The longer he goes on, so does his suffering and misery.

“He’s going to heaven, there’s no doubt. If his funeral was tomorrow, all the statesmen of the world would turn up. He touched everyone from the rich to the poor. I love my brother over anybody. Of all the famous people who ever lived, he’s the best. Everyone knows Muhammad Ali. He’s up there with Jesus Christ.”

“We’ve all been pushed out,” continued Rahman. “The only time I get to see him is at public events. She and her family are draining him. It’s so sad. There’s nothing I can do, they’ve blocked us all off.

“Before he got sick he told me, ‘Rahman, I’ve set up a trust fund for you after I die, you get the money.’ But she’s put a stop to it. If he knew what was happening and where I’m living now,” a shabby apartment in Louisville, “he’d be as mad as hell, so angry. He’d divorce her. If he saw what was happening with his children, he’d go crazy.”

Ali has nine children, none of them with Lonnie who is his fourth wife. We can speculate all we want, but we can no sooner uncover her motives than we can uncover the truth.

“I spoke to Muhammad Ali Jr. last week, as he was concerned about his dad. They’ve all tried to get in contact with him. She’ll put him on the phone sometimes, but he can only breathe on the line.

“I know him better than anyone. I can sense he’s unhappy. I can see it in his eyes. I love him, but she stops him from loving anyone. This is the saddest thing in my life. I’m going to let God take care of it—he’s the best attorney anyone can have.”

If God is an attorney, we had all better lawyer up for Judgment Day.

“I haven’t got much money,” Rahman said, “and I’m on disability benefits. I’ve had many strokes, twenty in all, and it’s affected my brain and short-term memory. The doctor told me I’m lucky to be alive—I should be dead. Every day is a blessing to me.

“We’ve barely got enough to pay our bills. The rent is $512 a month, and if we’re lucky, we may have $150 left after bills. If my brother had all his faculties, he’d look after me. I’d be living in a mansion.”

Those who live in apartments and dream of living in mansions are the people we look at askance. Perhaps Ali said what Rahman said he said, even though talking is next to impossible. Perhaps Lonnie has frozen out the rest of the family. Perhaps Ali is on the verge of death. There’s no way to know for sure.

“How the hell did he know at six that he was going to do all this? Only him and the Holy Spirit knows. He may be dying, but he’ll live on. You know the word ‘infinite’? That’s Ali, he’s infinite. His name will last forever.”

No doubt The Sun has had an obit in the can for years, as has every other major news outlet. Should Boxing.com do the same? Or is it unseemly to bury a man alive?

Web articles – via partners/network co-ordinators. This website and its contents are the exclusive property of ANGA Media Corporation . We appreciate your feedback and respond to every request. Please fill in the form or send us email to: [email protected]
Previous: Hugh Hefner : Actress sold the first issue of Playboy for 50 cents a copy
Next: Marilyn vos Savant with and IQ of 228