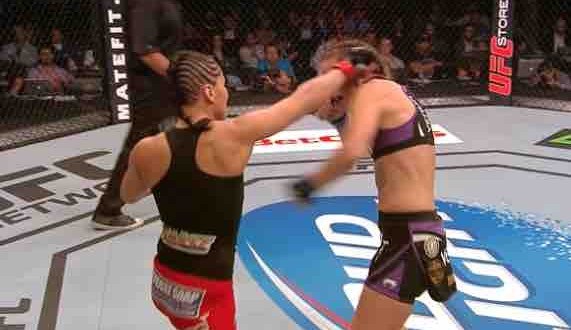 Leslie Smith’s ear ‘explodes’, UFC fighter Leslie Smith had part of her ear ripped off by a ferocious Jessica Eye punch in the final seconds of the first round in Mexico City on Saturday night.

Leslie Smith was suffering from cauliflower ear before the fight, a condition common in rugby forwards that is caused by continued contact to the ear, and requires draining to alleviate the build-up of fluid.

Thankfully, the fight was stopped before any more harm could be done as the doctor deemed Smith in a bad enough condition to wave it off, meaning Eye was awarded the victory.

Smith was far from happy, but admitted after the fight that the doctor was right to stop it and that she should have done a better job at protecting herself.

Posting on sqor.com along with a picture of the injury – which was shocking in itself – Smith said: “I was pretty mad in the cage. I saw some pictures afterward and I appreciate the doctors looking out for me. I guess. I should’ve adjusted to protect my ear before the doctors had to stop it.

“Thank you for all the support, thank you to my sponsors Kleinburg Private Wealth, Venum, Major’s Pharmacy, Vitality Bowls, and WODBOX. Thank you to my team and my coaches at El Niño Training Center for getting me ready. Thank you to all the fight fans. I’ll do better next time.”

Web articles – via partners/network co-ordinators. This website and its contents are the exclusive property of ANGA Media Corporation . We appreciate your feedback and respond to every request. Please fill in the form or send us email to: [email protected]
Previous: Katerina Netolicka Found Dead : Prada Model Found In Bathtub By Brother
Next: Lakechia Schonta Stanley: St. Louis Woman Gets 78 Years for Abusing Children