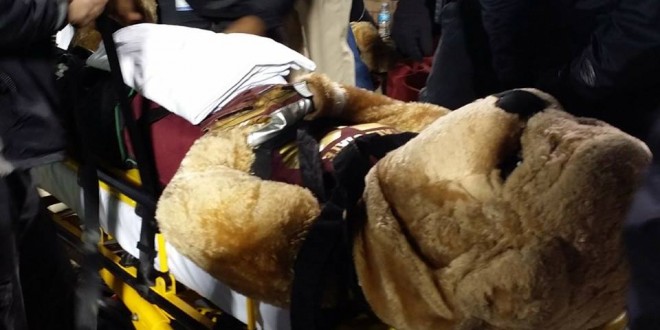 Mississippi State beat Ole Miss 17-10 in the 86th installment of the Egg Bowl, but lost one of its most visible supporters in the process. Their mascot “Bully”, the human in the costume, not the actual dog, suffered a compound fracture after being hit my an ESPN television cart during the game. According to the school, the student underwent surgery Thursday night. The accident happened in the 4th quarter. The Bulldogs went on to win in overtime.

The world of amateur athletics is murky enough, but who knew these brave men and women braving the elements in plush suits of personified animals would be the ones risking personal injury, and not just the players. Michaela Mills is so committed that even with a bone protruding from her leg, she never removed her mascot head as she was whisked away on a stretcher. That’s toughness personified.

Michaela Mills might never mascot again, but the team she loves won the Egg Bowl, finished 6-6 on the season and is now bowl eligible. Maybe in the bowl game she can mascot from a safe place, far away from ESPN’s golf carts.

Web articles – via partners/network co-ordinators. This website and its contents are the exclusive property of ANGA Media Corporation . We appreciate your feedback and respond to every request. Please fill in the form or send us email to: [email protected]
Previous: Crocodile Handlers In Florida : Seeks $25-Per-Hour Wranglers​​ (PHOTO)
Next: Canada to file claim to expand its Arctic seafloor boundaries, this week