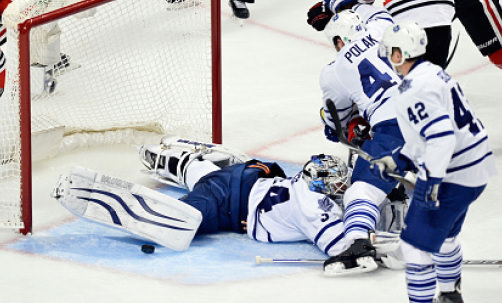 A poor start for the Leafs saw Chicago hold them to only a single ES chance in the opening period, and a goal in the final second left Toronto a two-goal deficit to try and make up.

Antti Raanta stopped 31 shots for his second shutout of the season to lead the Chicago Blackhawks in a 4-0 win over the Toronto Maple Leafs on Sunday.

Patrick Kane posted a goal and two assists while David Rundblad, Jonathan Toews and Kris Versteeg all lit the lamp for the Blackhawks, who have won three of their last four.

“Played the right way and got better as the game went on,” Blackhawks coach Joel Quenneville said.

James Reimer allowed all four goals on 34 shots for the Maple Leafs, who have dropped their past three.

“The record we have in the last three games we have to figure out a way to turn it around,” Toronto defenseman Dion Phaneuf said.

Chicago got the only goal it needed at 15:30 of the first, as Rundblad’s big slap shot from the left point went through a screen and in for his first of the season.

The Blackhawks were able to take a 2-0 lead into the second intermission as Kane skated down the right wing and passed it to the front where Versteeg shot it in just as time was running out.

After a scoreless second period, Chicago took a 3-0 lead at 9:07 on the power play as Kane cleaned up a rebound from a Brent Seabrook point shot for his 16th goal of the season.

Toews scored just over two minutes later to account for the final score.

Web articles – via partners/network co-ordinators. This website and its contents are the exclusive property of ANGA Media Corporation . We appreciate your feedback and respond to every request. Please fill in the form or send us email to: [email protected]
Previous: Anne Leitrim : Mummified corpse of nurse discovered after 7 years
Next: CHP Officer kills teen after machete attack