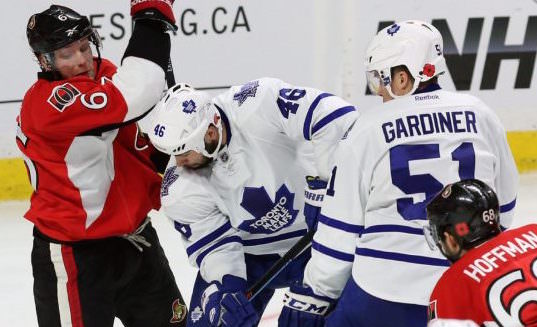 The most cringe-worthy hit at Sunday night’s Leafs-Senators game might have been in the stands.

A brawl between fans was caught on video at the Toronto Maple Leafs and Ottawa Senators game Sunday at the Canadian Tire Centre.

The video, which was posted to Facebook by Sandy Cryptkeeper Chapman and has been viewed over 52,000 times, shows a brawl that broke out at the Canadian Tire Centre in Ottawa between two groups of fans.

The fight quickly escalates when one man pours beer on top of the head of another.

There has been no word if anyone was injured.

Web articles – via partners/network co-ordinators. This website and its contents are the exclusive property of ANGA Media Corporation . We appreciate your feedback and respond to every request. Please fill in the form or send us email to: [email protected]
Previous: Jesus Was Married? Another Jesus and Mary Magdalene Hoax
Next: Swiss Space Systems tests at Jack Garland Airport, Report