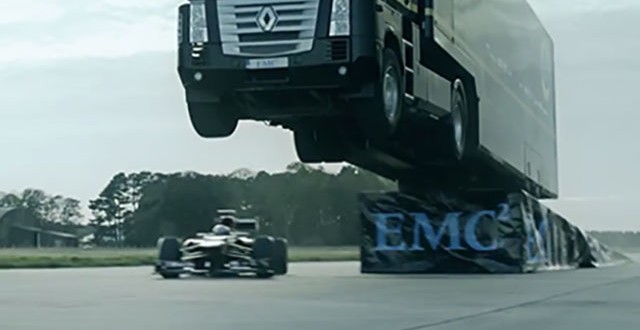 An oft-quoted factoid in motorsport circles is that a Formula One racer can drive upside down in a tunnel.

Enter stuntmen Mike Ryan and Martin Ivanov who went out and did just that, and set a world record in the process.

Martin – whose credentials as a stuntman include work on the James Bond movies – slides the Lotus F1 racer underneath the team’s semi-trailer.

The truck – with The Fast and the Furious alumni Mike behind the wheel – sails majestically through the air before landing a world record-setting 83 feet 7 inches away from where it took off.

Whether or not you can drive a Formula One transporter on the roof of a tunnel remains to be seen.

Web articles – via partners/network co-ordinators. This website and its contents are the exclusive property of ANGA Media Corporation . We appreciate your feedback and respond to every request. Please fill in the form or send us email to: [email protected]
Previous: Peaceful protesters demonstrate in Toronto, Report
Next: ‘Jurassic World’ trailer: Dinosaurs and Pratt (Watch)